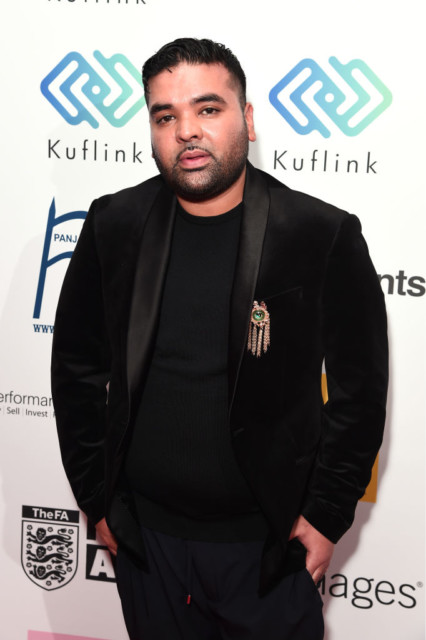 I’M A Celebrity fans have been watching record producer Naughty Boy take the lead in the kitchen.

It may have come as a surprise to some, but the music maker is a talented chef who has created signature dishes and cooked alongside James Martin. This week saw the campmates return to the castle and in a row over food, Naughty Boy, 40, uttered the words: “I guess it’s not the campmates fault that man’s a chef, innit.”

The DJ, real name Shahid Khan, was not impressed when Paralympian and Celebrity MasterChef winner Kadeena Cox tried to give him some advice on how to cook that evening’s meal.

In fact, in between making chart-topping hits with the likes of Beyonce and Emeli Sande, Naughty Boy has been making a culinary name for himself.

The artist collaborated with restaurant chain Shake Shack to produce a mouth-watering burger drawing in on his Pakistani heritage.

Called, the Naughty One, the dish consisted of a crispy chicken breast topped with Asian slaw and a spicy yoghurt raita sauce made from mayonnaise, coriander, chilli, lime and pomegranate, before being served on a potato bun.

He’s also wowed presenter Lorraine Kelly with his signature dish while on her talk show – the delicious Keema Shepherd’s Pie.

TV chef James was also in awe of the talented music star when he joined him at his home for an edition of the restauranteur’s Saturday Morning show.

At this point it was Naughty Boy who expertly showed off his skills and taught the trained chef how to make his special dish.

Most recently, Naughty Boy’s own fans had the opportunity to sample his kitchen delights.

The Grammy award winner said at the time: “I’m so excited to be bringing my dishes to BOXPARK Croydon. The energy of the venue is a perfect place for Naughty Boy Kitchen to start its journey.

“Cooking is another way for me to channel my creativity and I love that more people will be able to try my dishes next month.

“Dementia UK have been a huge support for my mum over the years and I’m really excited that through my dishes I will be able to contribute to helping others’.” He also wowed Sunday Brunch hosts with his culinary makes Labour in disarray as their own shadow cabinet cant agree on whether four-day week...