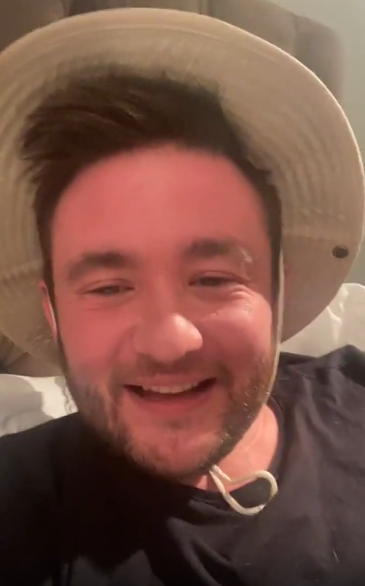 I’M A Celeb star Shane Richie’s son joked AJ Pritchard would “batter” his dad in a fight as the campmates’ feud rumbles on.

Things have become increasingly prickly between the pair, with AJ agitated by Shane’s efforts towards camp chores.

Last night the pair were chosen to do a Bushtucker trial together after viewers watched AJ give the actor daggers after he threw his mess tin onto the floor.

Reflecting on the action in an Instagram live, Shane Jr said: “Can you believe it, he’s doing another bloody trial. But I mean as British public go, you’re all geniuses. If my dad wasn’t my dad, and I was watching it from the outside, it would have been my dad and AJ.

“I feel sorry for my dad. I know a lot of people don’t like him, but a lot of people love him. I think he’s worried it’s because people think he’s being a knob or unjust, but the funny thing is there probably isn’t anything between him and AJ, and it’s mad because we’re all seeing a tiny little look in a 24 hour day.” He then laughed: “AJ probably would batter my dad… but he smashed it you know that trial tonight was really really hard.”

Tensions are at an all time high after ex Strictly pro AJ was forced to take over washing up duties.

He looked ready to blow as Shane’s tin dish crashed to the ground with a loud clang.

Tensions boiled over after Shane tried to make light of their row over the washing up earlier this week.

As the other campers giggled, AJ failed to crack a smile and instead he ordered Shane to “put it by the bucket”. Shane made an ill-received joke about the washing up

That didn’t go down well with Shane, who refused to move, and instead asked the group again, “who is doing the washing up?”

AJ finally replied: “Myself and Jess”.

Getting up off the bench, Shane remarked, “Oh, OK” and strolled past AJ releasing a loud sigh as he went.

Walking back to the campers, he grabbed AJ on the shoulder, with the dancer throwing him a furious look.

Viewers at home spotted the pair’s spat and reacted on Twitter. Shane’s plate crashed to the floor

AJ after Shane throws his plate down #imacelebrity #ImaCeleb pic.twitter.com/kYVEnyUZwf

AJ when Shane threw his plate on the floor #ImACeleb #ImACelebrity pic.twitter.com/Kkx0lts4Uf

Me after Shane threw his plate on the floor: #ImaCeleb #imacelebrity pic.twitter.com/ZURXXwiMzt

One said: “If Shane throws his plate down like that to someone on TV how does he treat staff in restaurants?”

But most shared memes of AJ looking angry after Shane’s actions.

The pair had exchanged a few tense words earlier this week after AJ asked Shane to wash up, but Shane snapped he couldn’t until there was hot water.

However, AJ then pointed out he had used the pot to get the hot water to soak the dirty dishes, leading to tension between the pair.

Then AJ commented that the pots and pans looked much cleaner after he’d scrubbed them, and Beverley Callard asked him: “So Shane’s done a very bad job?”

Did you miss our previous article…
https://www.hellofaread.com/im-a-celebrity/im-a-celebritys-first-eviction-announced-tomorrow-and-hollie-arnold-is-bookies-favourite-to-get-boot/

Britain fragmented into three different groups over coronavirus – the Trusting, the Dissenting and...

I’m A Celebrity fans all have the same complaint after Kadeena Cox is sent...