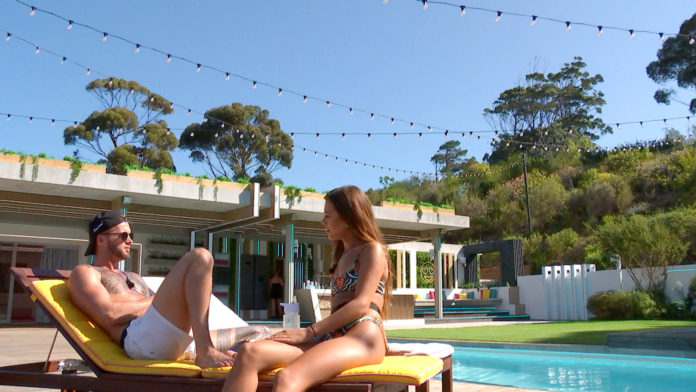 LOVE Island’s Jamie Clayton and Natalia Zoppa are the latest couple to be axed from the villa in tonight’s brutal dumping.

The Scottish recruitment consultant, 28, and student, 20, were voted the least popular pairing after facing the public vote yesterday.

Speaking after the dumping, Natalia joked that she was going to ‘block’ Jamie once they got back.

“In my head, the plan would be for us to pick up from where we left off in the villa,” Jamie said.

Natalia replied: “I mean, we live like 20 minutes away.”

Jamie joked: “We’ll see how long until she gets sick of me. See how long it takes for me to get blocked,” to which Natalia replied: “Now.”

Earlier in the episode, the couple were tasked with looking after a baby

They were pitted against Callum Jones and Molly Smith, Luke Mabbott and Demi Jones, Mike Boateng and Priscilla Anyabu and Jess Gale and Ched Uzor after the couples voted for who was the least compatible.

Earlier in the episode, Natalia appeared to have checked out of her romance with Jamie, telling him: “I’ve realised I’m not going to find a boyfriend in here, so I’m kind of ready to go home.”

She also hit out at Molly and Priscilla for picking her and Jamie in the least compatible vote.

Natalia entered Casa Amor as one of the six new girls

“It’s just a bit of a kick in the face,” she told Molly.
“I get it from two of the Casa girls. I get it logically but it just feels a bit s**t as well.”

Their dumping comes after viewers branded Natalia a ‘game player’ when she set her sights on Jamie after ditching Luke M when she entered the villa.

Fans couldn’t help but notice that Natalia grabbed Jamie for a chat just moments after it was announced that another villa recoupling was set to take place.

Siannise Fudge and Luke Trotman barely struggled with the task

She said: “The past couple of days, I have enjoyed speaking to you quite a bit and at this point right now, I do like you, so I would like to be in a couple with you. I just thought I’d let you know how I’m feeling really.”

Jamie appeared impressed by Natalia’s approach, replying: “That is ballsy, I like it, thanks. Well done!”

And while the Scotsman may have fallen for her charm, some viewers weren’t as convinced.

“Natalia…. the biggest game player ever to step foot in the villa,” one wrote on Twitter.

Another said: “Natalia is honestly such a game player. She will say or do anything to stay in the game. She needs to be kicked out ASAP.”

“She is trying to stay in the villa. She’s been on game since day 1.”

Earlier in Tuesday’s episode, Jamie and Natalia joined the other islanders in looking after fake babies.

The couple opted to give their tot the Harry Potter-inspired name, Voldy, and were tasked with feeding, comforting and changing their baby’s nappy.

Natalia joined the show as one of the six bombshells in Casa Amor and seemed to have a spark with Luke M.

That soon fizzled out as she revealed she didn’t feel any sexual chemistry with the 24-year-old, leading to her calling things off.

Genius PS5 trick lets you fit even more games on your console without having...

Fifa 21: When do rival rewards come out?