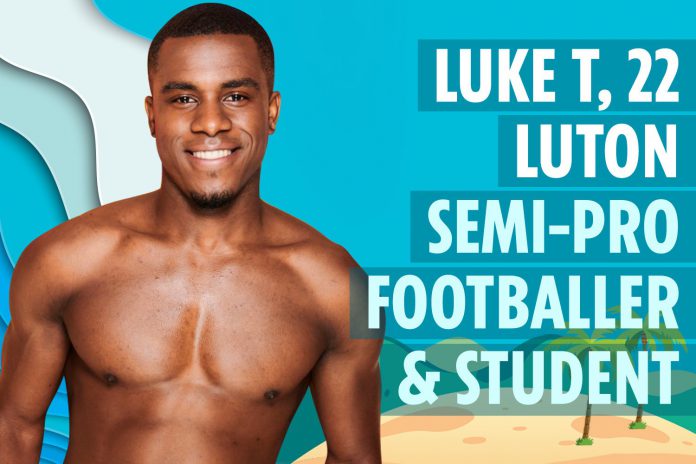 TWO more male bombshells are making their way into the stunning Love Island villa in South Africa – and Luke Trotman is one of them.

The semi-professional footballer is hoping to turn a few heads but which girls is he hoping will put her eggs in his basket? Here’s all we know about the sportsman…

Who is Love Island’s Luke Trotman?

Luke Trotman is a semi-professional footballer from Luton.

The 22-year-old is also still a student and his claim to fame is the fact his mother, Beverly Trotman, came sixth in The X Factor in 2007.

He explained: “I appeared on TV cheering her on in the audience. Shes done a few musicals and shes in the Kingdom Choir now but she didnt perform at Meghan and Harrys wedding!”

Luke rates himself as a “strong 8” and says he always gets compliments about his smile.
He describes himself as positive, smiley and energetic but admits he can be quite stubborn.

As for what he finds to be a turn off in girls, Luke says: “I really like girls who are intelligent. So, Id be looking for someone whos got a bit of something about them.”

And in case you were wondering, he’s loyal!

Luke adds: “I dont have a wandering eye, I wouldnt ever play anyone. I wouldnt lie to someone and then go and do something else. Id try and be open.”

The 22-year-old from Luton is still a student

The footballer describes himself as positive, smiley and energetic

The footballer plans to bring a “nice energy” to the villa

What is Luke Trotman looking for in the Love Island villa this winter?

The footballer plans to bring a “nice energy” to the villa and he’s hoping he can meet someone that he will have a relationship with.

He explained: “My New Year’s resolution is to find love, I really am looking for the real deal. My parents met when they were teenagers and are still together now so that’s what I want.”

Luke has got his eye on Leanne, Siannise, Sophie and Rebecca, so expect him to start making his moves as soon as he enters the Love Islandvilla.

He admitted: “I wouldn’t mind stepping on someone’s toes. But I would probably ask them before. I like to think I would.”

Mike and Connor better watch out!

Luke has got his eye on Leanne, Siannise, Sophie and Rebecca

Luke admits he can be quite stubborn at times

How can I follow Luke Trotman on social media?

He has over 2,000 followers – but that’s sure to rapidly rocket.

How can I watch Love Island?

The show airs on ITV2 from 9pm every night.

For the 2020 winter edition,Love Island: Aftersunwill air every Monday at 10pm after the main show has finished.

Both Love Island and Love Island: Aftersun will also be available to watch on demand on theITV Hub.

Dominic Raab was warned Afghan could fall to Taliban TWO WEEKS before he went...