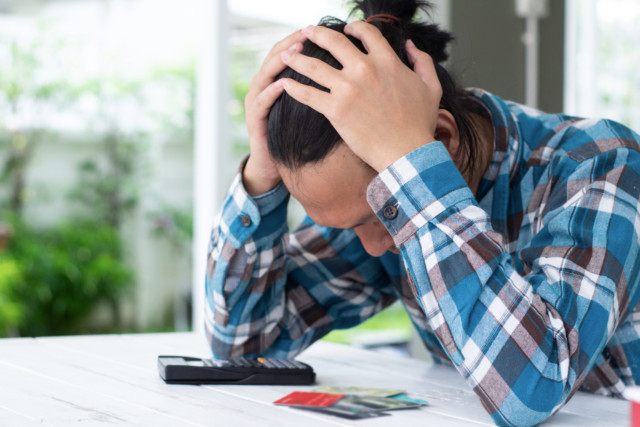 STRUGGLING Brits are being “tricked” into paying for debt support by ads on Google.

An investigation by HOAR has found copycat debt firms, which have similar names to free charities, pay to appear at the top of search engines.

Struggling Brits could be fooled into paying for “unsuitable debt products”

This is the latest instalment in our Consumer Crew’s Fix Your Finances series, showing you how we will continue to fight your corner.

People struggling with debt can access free support from charities such as StepChange, National Debtline and Citizens Advice.

They can provide free advice on managing your debts and help setup payment plans.

But debt firms which charge to set up IVAs often appear at the top of search engines such as Google and Bing instead.

There are no limits on the cost of arranging an IVA and fees can be on average £5,000, according to Citizens Advice.

Yesterday, a report by the City watchdog declared that the IVA market is broken due to “harmful” fee structures.

HOAR first reported on how debt firms are tricking Brits in 2018 but companies are still getting away with posting adverts that appear to be offering free support.

Debt management companies and advisers can legitimately and legally pay to have their advert displayed at the top of search results for certain terms.

Since November 2019, Google has only allowed firms accredited by the Financial Conduct Authority or licensed insolvency practitioners regulated by a recognised professional to pay for adverts related to debt help.

In both scenarios they also need to have been certified by Google and there are strict rules against misrepresenting services.

But in many cases debt firms are using similar names or phrases that campaigners say may fool people into believing they are accessing free support and could end up paying for a more costly IVA or products they do not need.

For example, an advert for National Debt Help appeared at the top of search results for “debt support” and “debt help” in December.

It promotes “government created debt relief” and while it offers free advice, the first product it promotes on its website is an IVA.

The adverts were removed once HOAR highlighted them to Google but other companies now appear with different sponsored adverts in the search results that imply government backing.

The highest sponsored Google search result for “debt support” and “debt help” at the end of January 2021 was a website called The UK Debt Expert that had the headline: “(UK Gov) legislated debt help – write off debt – free to setup.”

Sponsored adverts for debt companies Your Debt Expert and Money Advisor also appear at the top of the search results and refer to government support. The sponsored ads often imply that they are providing government help

Sara Williams, a debt adviser who writes the Debt Camel blog, said record numbers of IVAs are failing as people cannot manage the monthly repayments, suggesting they are being mis-sold.

She said: “IVAs are only suitable for a small number of people – most people without assets to protect should not consider an IVA as other options get you out of debt faster and more cheaply. Copycat firms will even mimic charities

These adverts were removed by Google once HOAR highlighted them to the search engine at the end of 2020 but other similar ads now appear.

Jane Tully, director of external affairs and partnerships at the Money Advice Trust, which runs National Debtline, said it is continuing to see misleading online adverts.

She said: “Regulators and Google have taken some welcome steps to combat the impersonation of debt charities by these firms. However, the number of misleading adverts that remain online makes it clear that more action is required.”

The Mental Health UK charity warns misleading adverts may exploit people when they are at their most vulnerable.

Laura Peters, head of advice and information at Mental Health UK, said: “The pressure that money problems place on people’s mental health increases the risk that they will be more vulnerable to debt management services that cost them money and make their situation worse.

“The message that people can access free and impartial debt advice is so important, it can make all the difference to someone struggling to stay afloat.”

StepChange has been warning of this issue for years and even paid for its own ad to appear at the top of search results for the charity.

It spotted and reported more than 70 adverts on search engines and social media during 2020.

Sue Anderson, head of media at StepChange, said: “Impersonating legitimate charities for commercial gain is appalling, especially at a time when almost 15million people having been financially affected due to coronavirus and may be searching online for help.”

Search engines, the government and the Insolvency Service are being urged to do more to clampdown on these practises.

Ms Tully suggested bans on these sorts of adverts should fall under the government’s online harms bill that is currently going through parliament.

The proposed legislation is currently focused on appropriate content being shared and children being protected online but there are also calls for it to help counter online scams and fraud.

She added: “A tightening up of the rules is needed.

“This should be included in the government online harms bill along with all online paid-for advertising and lead generation firms need to be subject to FCA rules, otherwise vulnerable people will continue to be targeted, leading them to inappropriate advice.”

Another route could be through changes to insolvency regulations.

The Insolvency Service launched a call for evidence on how the sector is regulated which closed in October 2019 but has not been responded to by the government.

Ms Anderson added: “While the online harms bill could usefully be used to address some of the problems, the drivers of harm also lie more deeply in the structure of commercial incentives operating in the personal insolvency market.”

An Insolvency Service spokesperson said a response was expected in due course.

The spokesman said: “Advertising by insolvency practitioners must comply with regulations and professional codes of practice and we are working closely with regulators to tackle misleading advertising.”

A spokesperson for Google said: “We take dishonest business practices and misleading ads very seriously and consider them to be an egregious violation of our policies.

“When ads do not comply with our policies, we are taking immediate action to remove them.”

A statement from Creditfix, which runs the Your Debt Expert website, said: “Creditfix is looking into the matters raised and has paused the advertisements while this process is underway.”

The Financial Conduct Authority has announced that the home repossession ban will continue until April but bailiffs will be able to seize goods and cars.

See how you can apply for a mortgage payment holiday.

A ban on bailiff evictions due to end on January 11 has been pushed back until at least February 21.

Millions on legacy benefits given fresh hope over payout that could be worth £1,500

I’m a single mum-of-two with cancer and rising costs mean I have to work three jobs, my body is broken

What is Operation Yellowhammer and when did the document leak?

Vancouver Island where Harry and Meghan are staying is rocked by 4.5 magnitude earthquake