A LUCKY lottery winner has revealed she changed her numbers at the last minute – and her first big money splurge was definitely a cool one.

Suzy Fenton decided to switch up her lottery ticket as she “wasn’t feeling” her regular selection, and it was a hunch that ended up hitting the jackpot.

The 44-year-old, from Yorkshire, forked out £600 on a top of the range air conditioning unit for her first investment to help her through Britain’s baking summer heatwave.

Since cashing in with the winning ticket on August 1, Suzy will now receive £10,000 a month for the next year.

Despite making her first buy a practical one, she is now planning to expand her horizons with her next purchase, as she has her heart set on flying to North America to finally meet friends she met online.

The lucky winner also plans to pay off the mortgage for the three-bedroom home she shares with partner Ian and beloved dog Flynn.

She told Hull Live: “It was obviously a super-practical purchase but something which was desperately needed.

“We were able to find a local store that had one in stock and could deliver. It came straight away, so we were able to stay cool.

“I play Ark Survival Evolved and I play with a few people but I have two really good friends, one in Alberta, Canada and one in Texas.

“The first thing my friend in Canada said when I told her was ‘so that means you can come and see me now?'”

Suzy revealed that her lucky day only happened because she “wasn’t feeling” the numbers she normally chooses.

The snooker enthusiast said she instead chose birthdays and numbers close to her heart, including 47 as 147 is the maximum break in the game.

She added: “I played a lot of pool when I was younger and my lovely parents bought me a snooker table so 147 has always stuck with me, so I did 47.”

Despite hitting the jackpot, Suzy said she has no plans to quit work.

Instead, she said her windfall will allow her the freedom pay off her outstanding debts without worry.

Suzy also plans to clear off her car loan before jetting off on her dream holiday and treating herself to laser eye surgery.

The customer services administrator said that she had been chatting with a colleague about what she would do if she ever won the lottery just hours before.

“I’m just going to carry on working for now and have a review once everything is paid off to see if I could go part-time for a bit,” she said.

“But it just allows me so much more freedom to know things are going to be paid off.

“We’ve got a car loan that will be nice to pay off and the mortgage will be able to be cleared.

“I’ve got terrible eyesight, I’m as blind as a bat without my glasses so I’m going to see if I’m eligible for laser eye surgery.

“It will be nice to be able to buy some new clothes and just to pay off the debts.” 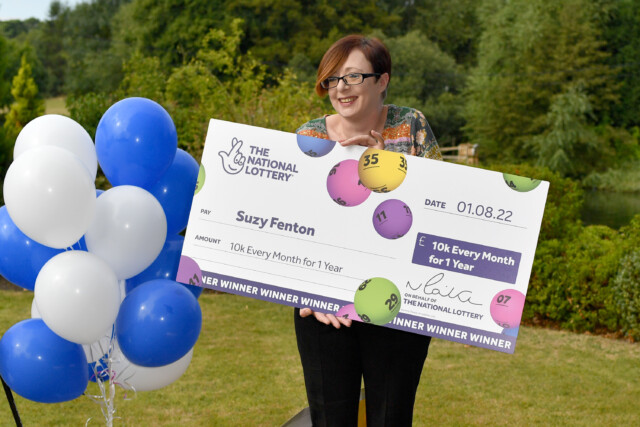 Princess Diana ‘was on best terms ever with Charles before she died and had...

Strictly’s Hamza Yassin reveals 17 words he whispers to Jowita before routines that has...