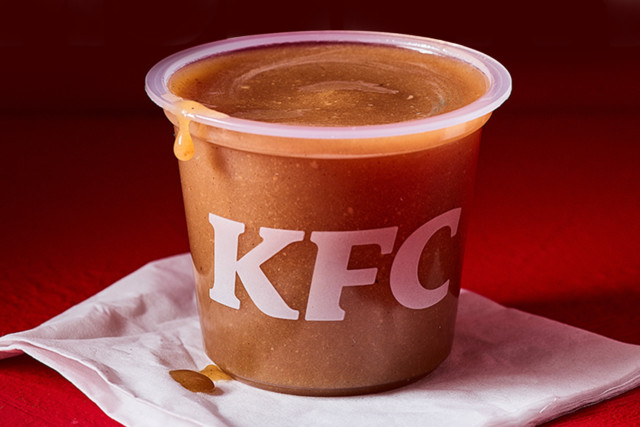 KFC fans have admitted to feeling “physically sick” after discovering what goes into the fast food chain’s popular £1.29 gravy.

Channel 4’s “Inside KFC at Christmas” documentary premiered this week, giving chicken devotees a behind the scenes glimpse at the beloved fast food chain.

One of the greatest stars of the show turned out to be KFC’s wildly popular gravy – and exactly what it is made from.

The one-hour documentary reveals how the dipping sauce is really made, with KFC worker Anne taking fans through the steps in the Buckshaw Branch’s kitchen.

KFC’s gravy is so popular at the northern branch that they sell double the amount of gravy compared to the average KFC store – enough to fill nine bath tubs a week.

As Anne takes viewers round the kitchen, she reveals how she makes the thick sauce by mixing two scoops of “crackling” to 3.5 litres of cold water.

But it’s not the crackling many would recognise – like pork crackling – instead the narrator reveals that “crackling” is made up from the leftovers at the bottom of the chicken fryer.

Anne whisks the concoction together, she adds a “magic ingredient” – so secretive, it doesn’t say what’s in it on the package – before putting the container into the microwave.

As Anne takes the heated liquid out, she declares: “I’m a great believer if you wouldn’t eat it yourself you shouldn’t expect anyone else to eat it.”

However, the gravy-making process didn’t get everyone’s tummies rumbling, with some fans admitting the ingredients made them “feel sick”.

Some fans took to Twitter to express their dismay at the sauce’s special ingredients. Just watched #insidekfcatchristmas, I love KFC gravy, I knew how it was made, but watching that woman make it, made me feel sick! #kfc @kfc @KFC_UKI #kfc #InsideKFC I love me some kfc but that gravy burger makes me feel sick to look at. Just seen how the gravy is made, that is so grim! Their gravy costs £1.29 and is a huge hit with KFC fans

One fast food fan said: “The way that KFC make their gravy has made me feel physically sick.”

Another wrote: “Just watched #insidekfcatchristmas, I love KFC gravy, I knew how it was made, but watching that woman make it, made me feel sick!”

And a third asked: “Is anyone else watching the #KFC at Christmas documentary and have also just witnessed how they make the gravy and feel a bit sick looking at it.”

However, other fans admitted the show made them feel peckish, with one tweeting: “Watching KFC at Christmas and suddenly I want to bath in their bloody gravy”.

While another fan gushed: “KFC gravy is absolute god tier. We have it on our family Christmas dinner no joke.”

Boris Johnson could speak to Joe Biden today – but Macron & Merkel are...

Prince Andrew slammed by campaigners after pledging to redeem himself as ambassador against ‘sex...