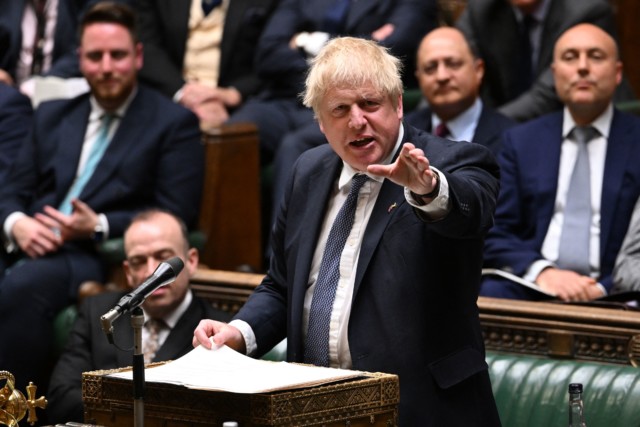 BORIS Johnson is betting on a bonfire of Brussels red tape to fire up Britain’s sluggish economy and fix the cost of living crisis.

In yesterday’s Queen Speech, the PM outlined a string of measures to get the anaemic growth back on track after the pandemic.

But Mr Johnson warned we could not spend our way to prosperity or shield people completely from the pain of soaring bills.

Unveiling 38 proposed laws, he insisted: “We need to grow our way out of it, by creating hundreds of thousands of new high-wage, high-skilled jobs, across the country.”

But he disappointed millions by not including any plans to help struggling families immediately.

Instead, he wants mountains of EU regulations and laws left on our statue books to be overturned without a vote in Parliament to speed up deregulation. 5 key takeaways from the Queen’s Speech including Brexit bonanza

And procurement rules will be made simpler and more transparent to help businesses large and small bounce back from Covid.

But none of these measures will help drive down crippling inflation immediately.

Responding to the next year’s policy agenda, desperate Tory MPs begged Mr Johnson to cut taxes now instead to save the country from stagflation disaster.

Their pleas came amid a growing clamour for an emergency Budget for struggling families — with ministers hinting a new bailout is in the pipeline.

Policing Minister Kit Malthouse said the PM and Rishi Sunak were “constantly monitoring the situation” as they weigh up stepping in.

And the Welsh Secretary Simon Hart said: “We’ve not heard the last from either Rishi or the PM on the cost of living.

But Mr Johnson used his big Commons announcement to warn of a painful year ahead.

He warned: “For every pound of taxpayer’s money we spend on reducing bills now, it is a pound we are not investing in bringing down bills and prices over the longer term.

“Our best remedy lies in urgently delivering on our mission to turbocharge the economy.”

Despite a hint from the PM that he would say more in the days to come, panicked No10 scrambled to play down hopes the cavalry was coming.

It insisted no major announcement was in the offing, warning: “Our capacity to inject money is finite.”

Mr Johnson said the aftershocks of Covid-19 and the biggest war in Europe since 1945 were causing disruption around the world, with all major economies facing cost-of-living pressures.

In a testy Commons exchange, Sir Keir Starmer accused No10 of whacking up taxes at the worst possible moment.

He said: “This Government’s failure to grow the economy over a decade, combined with its inertia in the face of spiralling bills, means that we are staring down the barrel of something we haven’t seen in decades, a stagflation crisis.”

He warned: “Taxes today are too high. We need to get some fundamentals right. High taxes don’t deliver growth — they stifle it.

He urged No10 to consider an emergency budget to deploy “our fiscal firepower now when our constituents need it — not after they have suffered”.

Meanwhile, he branded the failure to get young families on the housing ladder “a scandal”.

As well as trying to fire up the economy, the Queen’s speech also vowed to legislate to help renters, rejuvenate ghost town high streets and improve Britain’s schools.

Ministers will abolish no-fault evictions and crack down on private slum housing.

And residents will get to vote on new housing in their area.

However, a sweeping planning law relaxation was ditched amid opposition from shire Tories.

High streets will be revitalised with new laws forcing landlords to rent out shops that have stood empty for months.

Meanwhile, the schools academies programme will get a boost.

The Bill will put an end to lawyers using courts to block deportation of foreign offenders, while freedom of speech will be protected.

Meanwhile, greedy shipping companies will be forced to pay staff the minimum wage while in British waters — or face bans from British ports.

The proposed law comes after P&O Ferries sacked its entire workforce and tried to replace them with cheap foreign workers.

A WAVE of new Brexit laws will rip up Brussels red-tape and strip back archaic EU controls to try to turbocharge the economy.

A Brexit freedoms bill will allow ministers to amend laws inherited from the bloc without a vote in parliament. The first free trade deals with Australia and New Zealand will be put into action — slashing the price of goods such as wine and meat.

Ministers want Britain to become a world-leader in food and innovation research — so will abandon EU rules on gene editing to make goods healthier and allow strawberries and other foods to be grown here all year round.

LANDLORDS will be forced to rent out empty shops to get new businesses.

Covid al fresco outdoor dining introduced during the pandemic will be made permanent. Residents will get to vote on what new housing is built in their streets.

Developers will have to hand over more of their profits to the local community to build things such as GP surgeries and schools.

In a boost for Generation Rent tenants, no-fault evictions will be abolished — giving greater protection against greedy landlords.

The schools academies programme will be stepped up and a national home-schooled pupils register will be created.

SPOOKS will be given new powers to deal with modern threats from states such as Russia, China and Iran — with sabotage laws to deal with cyber and drone attacks.

Asbo-style restrictions will be placed on foreign agents who are a threat to the UK but whom police do not have enough evidence to prosecute. Ministers will finally introduce a Bill of Rights to end the barmy system which lets foreign criminals stay in Britain because they own a cat.

In a giant win for Brexit Britain, EU human rights laws will be replaced.

NEWSPAPERS will be freed from the crippling threat of bankruptcy if they do not sign up to state regulation. Cancel culture will be curbed with laws to stop students being silenced in woke universities.

A free speech czar will have the power to launch investigations and sanction institutions which are curbing debate.

Controversial gay conversion therapy will be banned — but only for under-18s or those being coerced into it.

A ban on fur and foie gras being brought in from overseas has also been dropped after a Tory backlash.

BORIS Johnson teased Sir Keir Starmer over his Currygate fallout — by asking him what his “main takeaway” was from the Queen’s Speech.

The pair were forced into an awkward chat as they walked from the Commons to the House of Lords to hear Prince Charles give the monarch’s address. It was the first time they had come face to face since Durham police opened an investigation into the Labour leader’s lockdown beer and £200 curry dinner.

Later, Tory MP Graham Stuart used a traditional gag-filled first response to the Speech to mock Sir Keir saying: “Never ever in the history of human conflict has so much karma come from a korma.”

Chancellor Rishi Sunak, fined for a lockdown breach, and Labour deputy leader Angela Rayner, who was at the Durham dinner, had to chat to each other as they arrived at the same time. Alesha Dixon reveals she’s desperate to return to the US and crack Hollywood after...

British military ready as minister vows to ‘protect our partners’ in face of Russian...