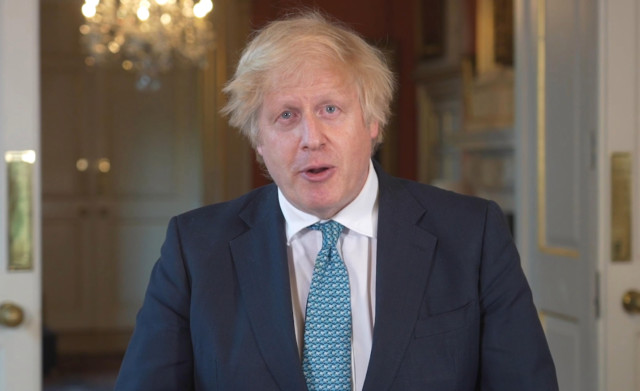 Mr Johnson said the outrage over the death of George Floyd at the hands of a police officer in Minnesota had awakened an “incontrovertible, undeniable feeling of injustice” and he called for people to “work peacefully, lawfully, to defeat racism”.

In a Twitter video message last night, he acknowledged the concerns of anti-racist protesters’ are “founded on a cold reality”.

However, he warned there would be consequences to like how damage property or harm the police.

Protests across the UK over the weekend were mostly peaceful, but tensions between cops and demonstrators did flare up.

In Bristol, the statue of slave trader Edward Colston was pulled down and tossed into the river.

In London, the Winston Churchill memorial and other statues were defaced with spray paint.

One demonstrator was seen climbing on the national war memorial, The Cenotaph, which is dedicated to those who died in WWI, and setting fire to the Union flag.

The Met Police said they arrested 65 people over the weekend and added dozens of officers suffered injuries.

Mr Johnson added he would not support those who break social distancing rules – which he also acknowledged was disproportionately harming minority communities.

He said: “So no, I will not support those who flout the rules on social distancing, for the obvious reason that we risk a new infection at a critical time and just as we have made huge progress.

“They are hijacking a peaceful protest and undermining it in the eyes of many who might otherwise be sympathetic.”

The PM added that he understands the angry of the protesters and why demonstrations have held.

Mr Johnson said: “In this country and around the world his dying words – I can’t breathe – have awakened an anger and a widespread and incontrovertible, undeniable feeling of injustice, a feeling that people from black and minority ethnic groups do face discrimination: in education, in employment, in the application of the criminal law.

“And we who lead and who govern simply can’t ignore those feelings because in too many cases, I am afraid, they will be founded on a cold reality.”

Last night’s comments are the latest to date after Mr Johnson declared the Black Lives Matters protests have been “subverted by thuggery”.

The PM had warned those responsible “will be held to account”.

He said: “People have a right to protest peacefully & while observing social distancing but they have no right to attack the police.

“These demonstrations have been subverted by thuggery – and they are a betrayal of the cause they purport to serve.”

Labour leader Sir Keir Starmer said it was “completely wrong” for protesters to rip down the Colston statue and toss it into the harbour, but told LBC Radio the monument to the slaver should have been removed long ago. Protesters march on the US Embassy in London Protests in London on Sunday were largely peaceful Did you miss our previous article…
https://www.hellofaread.com/politics/up-to-20000-kids-and-teachers-to-be-swabbed-to-see-if-covid-spreads-in-schools/

Love Island’s Nathan Massey shows off his weight loss and says quarantine has been...

Emmerdales Noah Dingle will be left fighting for his life after drug collapse in...

Queen’s staff pulling out all the stops to ensure she attends Epsom Derby as...