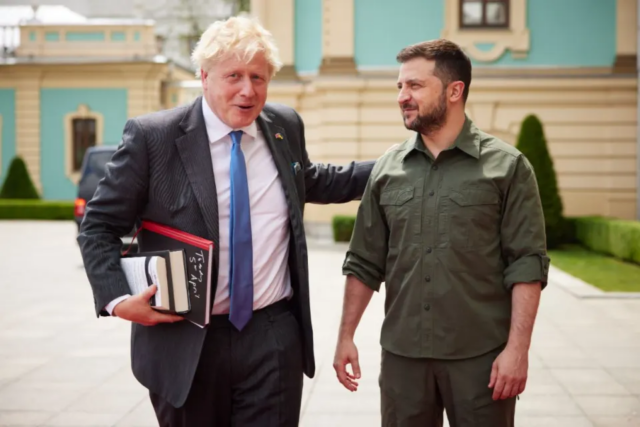 BORIS Johnson will “put an NLAW” under the international community urging them to stand firm with Ukraine in a week-long foreign policy blitz.

The PM – who gets back from his summer holiday in Greece today – will get back to work by taking aim at Mad Vlad Putin with a string of interventions.

With just two weeks left in No10, Boris wants to cement his legacy as Ukraine’s closest friend.

He is expected to hold calls with his close pal President Volodymyr Zelensky this week.

While No10 and the Foreign Office are expected to mark Ukraine Independence Day – the  celebration of the nation’s freedom from the Soviet Union – this Wednesday.

Foreign Secretary Liz Truss – the overwhelming favourite to replace Boris as PM – is also expected to stamp her mark on the special relationship with an article in a Ukrainian newspaper.

One ally of the PM said  Boris will hold the world’s feet to the fire to keep up its military and political support for Ukraine even after he leaves No10.

They told HOAR: “He will put an NLAW under the world community on Ukraine.”

There is also expected to be a renewed focus on the Home for Ukraine scheme – which has seen big-hearted Brits give homes to over 100,000 Ukrainians fleeing Putin’s missiles.

Several ministers are expected to make trips to our Nato Allies in Eastern Europe.

Did you miss our previous article…
https://hellofaread.com/politics/labour-mps-snapped-in-damning-photo-posing-by-flag-of-banned-terror-group-responsible-for-killing-hundreds-of-civilians/

EastEnders fans in meltdown over return of hated character who found fame in Footballers’...