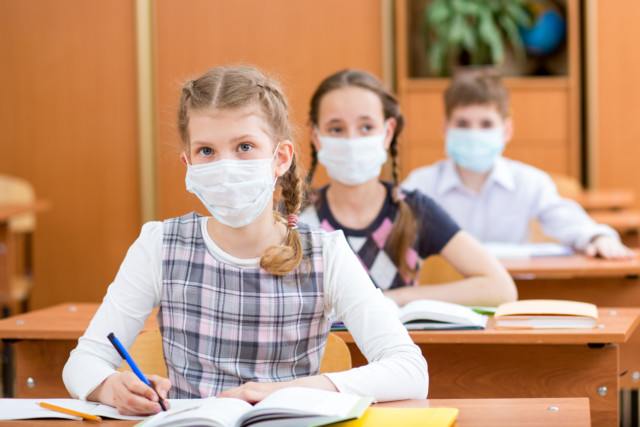 CHILDREN wearing masks in the classroom could harm their education, a Government minister has warned.

Health Minister Edward Argar said this morning there is no reason to make kids where masks while at school – and making them cover up could hurt their learning. Mr Argar told BBC Breakfast: “(Children wearing masks) is not something that’s a prospect at this point.

“The Department for Education has been very clear that that poses a challenge to the ability to teach and the ability to learn in a certain context.”

The health minister said the measures already in schools – including keeping each class as a “bubble” that has to social distance from other bubbles – was more than enough to keep kids and staff safe.

He said: “We are essentially setting up different class groups or year groups as social bubbles.

“Were there to be a case and schools are a low risk environment then we could implement a version of the local lockdown (with) the testing, the tracing, for those classes to contain any such outbreak.”

He added: “At the moment we believe the measures that have been put in place in terms of social distancing around those bubbles and around the facilities are the right ones.”

But Mr Argar said if there was strong scientific evidence suggesting wearing masks would keep any fresh outbreaks in schools at bay they would consider introducing them.

The Government has stressed that all schools in England will open for all pupils on September 1.

The PM’s official spokesman tried to allay fears schools could close again if areas were thrown into local lockdowns.

He said yesterday “Schools would be the absolute last sector to close in any local lockdown.

“Other venues would be expected to be closed first in the event that strict lockdown measures would have to be applied.

He said a “detailed and robust plan” had been developed in the event of pupils coming down with the virus, adding: “Local directors of public health would agree appropriate measures with the schools – for instance, the bubble which the infected child was in not attending school for 14 days.”

Test kits will be available for schools to help them quickly get a child or member of staff tested if they need to.

Mr Argar assured worried parents that it was safe to send their kids back to schools after a study suggested teenager could spread coronavirus just as easily as adults.

Last night The Times reported the fresh study from PHE is expected to say that older, secondary school pupils can transmit it just like adults do.

Kids under 11 already are not required to wear masks in areas where adults are expected to wear them – such as public transport.

He said: “That isn’t complete research, that work is still underway and I don’t want to prejudge what that will and won’t say.

Multiple international studies from France, Australia and Denmark have shown children are much less likely to become infected and pass it on to other people, Mr Argar said.

He said: “One study does not a consensus make.

“Parents can have confidence that their children can go back to school.”

Kids in Scotland were the first children in the UK to head back to full classrooms since March today, with all schools in Scotland set to be reopened by August 17.

Social distancing measures have been put in place – including staggered lunch breaks and extra time for hand washing between lessons.

Boris Johnson visited a school yesterday as teachers prepare for kids to come back to classrooms.

He said it was the nation’s “moral duty” to ensure children can restart face-to-face learning again.

The PM added: “It’s not right that kids should spend more time out of school, it’s much much better for their health and mental wellbeing, obviously their educational prospects, if everybody comes back to school full-time in September.” PM plans to oust bungling Gavin Williamson after A-Levels fiasco and replace him with...