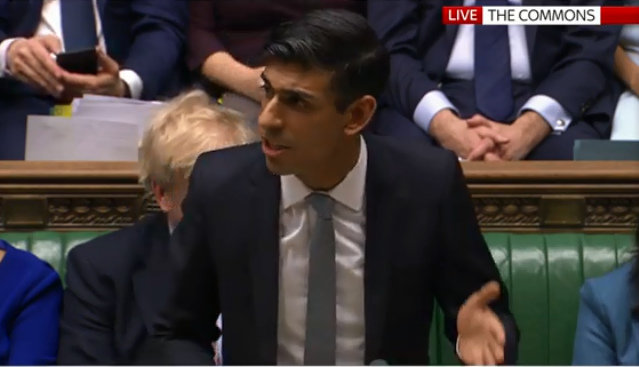 A THREE-point coronavirus battle plan is being laid out in today’s budget to get the NHS, business and public ready to fight the battle.

Chancellor Rishi Sunak is rolling out his economic action plan this afternoon to try and stop the spread of the deadly disease – with radical tax cuts, extra sick pay and help from the Government.

In a ground-breaking Budget he revealed plans to scrap business rates for businesses for a year, a fresh loan scheme to help small firms, and new help for people to claim benefits help from day one.

Brits will be able to get sick pay if they have to stay at home – even if they don’t have any symptoms of the virus bug.

And they will be able to get a doctors’ note through NHS111 instead of a GP.

Mr Sunak told MPs in the Commons today: “I want to set out our economic response so we bring stability and security.

“Let me say this: We will get through this – together. The British people may be worried, but they are not daunted.

“We will protect our country and our people. We will rise to this challenge.”

He said that the plans would be “temporary, timely and targeted”.

The Government will scrap business rates for the entire year for millions of firms.

And hotels, night clubs and gyms will get a huge discount too.

Banks will offer loans of up to £1.2m to support small and medium sized businesses affected by coronavirus.

And the Government is to pay businesses for the cost of extending sick pay packages for 14 days as well.

Mr Sunak revealed plans to make it quicker and easier to get benefits by removing the minimum floor in Universal Credit.

He told MPs: “I’m relaxing the requirement for anyone to physically attend a jobcentre; everything can be done by phone or online.”

Those on ESA will be able to claim for help on day one rather than day eight.

HELP FOR THE NHS

And the NHS will get whatever funds it needs to tackle the virus, he said.

That will start with a £5billion emergency response fund – and more cash will be made available if needed later on.

In a huge ralling cry to the nation as he reassured them Britain’s Government had a full plan for the outbreak, he insisted that he would also deliver on the election manifesto promises.

He said: “We promised to get Brexit done, and we got it done.

“We promised to let hard working families keep more of what they earn. This Budget gets it done.

“We promised to level up, with new roads, railways, broadband and homes. This Budget gets it done.

“And, yes, we promised record funding for our NHS and public services. This Budget gets it done.

“This Government delivers on its promises and gets things done.” The health minister warned colleagues on a Tory WhatsApp group this morning after she became the first MP to contract the killer bug yesterday.

Labour MP Rachael Maskell has also revealed that she has been told to “self isolate” over coronavirus fears – after she met with Ms Dorries.

Another MP in the group said the parliamentary party is “fairly relaxed and determined to carry on working”.

Ms Dorries, the minister for patient safety, had played a leading role in drawing up legislation to tackle the deadly virus that has killed six Brits.

Now health officials are now scrambling to trace the hundreds of people she came into contact with in the past week including MPs, civil servants and constituents. Crisis-hit Northern Rail close to collapse and facing its franchise being axed by the...

The Masked Singer audience ordered to leave after take it off chant reveals warm-up...

Emmerdale actress Gemma Oaten reveals she was forced onto benefits for a year when...