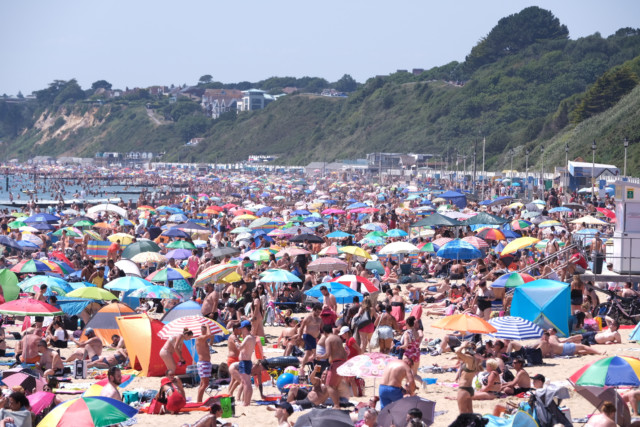 Professor Whitty urged Brits to be sensible as the local Bournemouth MP said beaches will be closed if they are flooded with sun-seekers ignoring social distancing. The beach had been trashed with rubbish by crowds Professor Whitty wrote on Twitter last night: “COVID-19 circulation has gone down due to the efforts of everyone but is still in general circulation.

“If we do not follow social distancing guidance then cases will rise again.

“Naturally people will want to enjoy the sun but we need to do so in a way that is safe for all.”

“A major incident was declared, the local authority and indeed the police couldn’t cope.

“The beach should have been closed down or at least shut down to prevent people from entering.

Mr Ellwood warned that he “would hate to see Bournemouth or any seaside resort be where the second spike is the first to appear.”

The local authorities needed to be handed out greater powers and resources to shut down and close beaches if they are swamped with people, the MP said.

Mr Ellwood added: “We need to make sure no beach was like yesterday, those scenes were unacceptable, until there is a vaccine we should not be seeing this.”

He said it was a “perfect storm” where people were still furloughed and children were out of classrooms and everyone decided to pile into the beach.

Health Secretary Matt Hancock has warned the Government does have the power to and will close beaches if people refuse to behave responsibly.

George Eustice, the Environment Secretary, said this morning: “Clearly yesterday we had droves of people going to the beach in very large numbers, that was much more difficult.

“We do have powers to put in place closures should that be necessary.

“If it were necessary to do that to control the virus, then we would.

Shocking pictures of the aftermath of the crowds show the beach had been trashed with tins of rubbish, beer cans and glass bottles.

Local authority staff were hard at work this morning trying to clean up the beach.

When asked about the worrying scenes, a spokesman for the PM said: “What I would say is that the PM and the Government’s scientific and medical advisers have stressed the great importance of the public continuing to adhere to social distancing advice.

“It’s only because of the public’s hard work that we’ve been able to bring the virus under control.

“If the rules don’t continue to be followed and the virus starts to spread exponentially again, then we will look at having to reverse some of the easements that we’ve put into place.

“And I don’t think anyone in the British public would want for that to happen.”

When announcing that most of the lockdown measures would be lifted next Saturday, Boris Johnson repeatedly stressed he would not hesitate to bring in local or national lockdowns in necessary.

The fears over a second wave of coronavirus comes after HOAR revealed MPs have been worried about the risk of transmission on beaches for weeks. Megan Barton-Hanson’s millionaire playboy ex, 55, opens up about their wild fling after meeting...

I’m A Celeb’s foul drinks trial returns tonight – but the perfect campmates are...