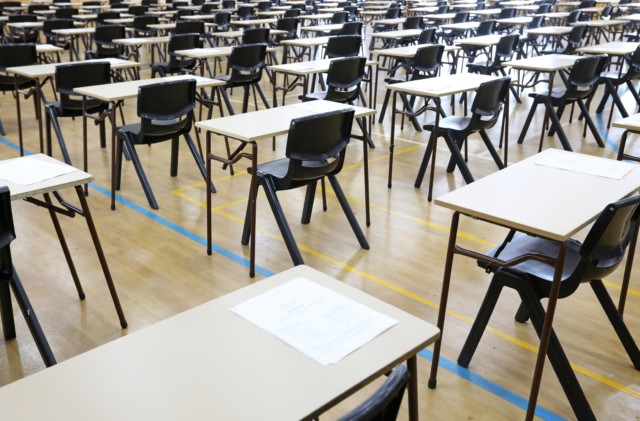 FOUR in ten A Level grades could be changed tomorrow thanks to an 11th-hour rule change to avoid exams chaos like in Scotland, the schools minister admitted today.

Late last night the Government confirmed new plans for a “triple lock” on exam grades to stop thousands of kids being marked down unfairly like what happened north of the border last week.

Scottish Highers results descended into chaos after 124,000 pupils received lower grades than what they were predicted thanks to moderators marking kids down below their teacher assessed grades.

Yesterday the Scottish Government u-turned and said they would cancel all the changed grades and return to the teacher-picked ones instead.

The move caused panic in England and Wales as the Government feared a similar situation.

Now students will either get to pick the highest of either their moderated grade, their teachers’ prediction, or they can choose to sit the exam in the autumn instead.

Nick Gibb told LBC this morning that “40% of grades will have been adjusted tomorrow but mostly by, the vast majority by just one grade.”

No exams were sat this year thanks to the coronavirus crisis.

He told BBC Radio 4: “We are not apologetic for looking, at every stage,  even at the 11th hour, for systems we can use to make the system as fair as possible for young people.

He stressed that the changes “will only affect a small group of people” and most people will get the correct grades they deserve the first time around.

He added: “We want to make sure that every young person gets the grades they deserve.

“We are sticking with the system we have provided – we are not getting rid of it.

“We think its robust and very fair.”

Universities are being urged to be “flexible” with students who don’t get their predicted grades this year during the pandemic.

Some are taking students from January to allow pupils to sit exams in the autumn.

However, without standardizing some of the grades, Mr Gibb warned there would have been a 12 per cent rate of inflation from last year – which may have made some qualifications rated worthless. One source told the Daily Mail: “in Scotland there are now students walking around with inflated grades that no one will take seriously.”

She added: “I feel for students affected by this chaos.”

Ministers to use UK-wide 2030 World Cup bid to stop nationalists splitting up the...

Apprentice star Michelle Dewberry trying to become an MP for the second time as...