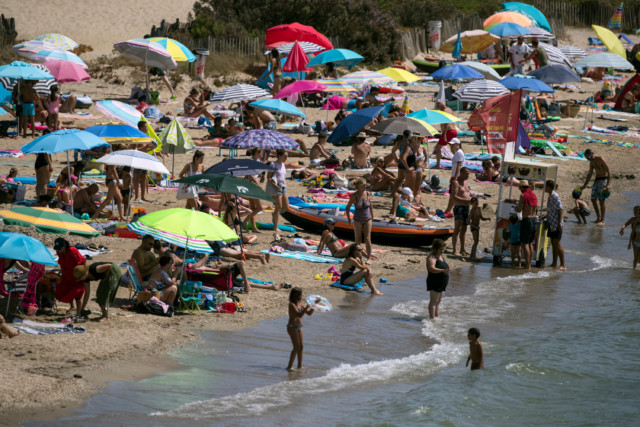 HALF a million Brits in France face a desperate dash to get home after the country was tonight kicked off the government’s safe list.

Transport Secretary Grant Shapps announced this evening that 500,000 holidaymakers have until 4am on Saturday to return to the UK to avoid isolating for two weeks.

Brit holidaymakers in France face a mad scramble to get home Another 500,000 set to go to France this summer have also had their plans thrown into doubt.

The Netherlands was also added to the quarantine list tonight.

Holidaymakers now face travel chaos in a mad 30 hour scramble to return home before the new quarantine rules kick in.

With planes still limited, Brits will have to make a desperate dash to the Eurostar or ferries to try and secure their spots to return home.

The cut off point is 4am on Saturday and anyone arriving after that will have to isolate for two weeks.

The Foreign Office advice will change, which will make it easier for people to get refunds on their bookings.

A string of other popular destinations, including Malta and Holland, have been booted off the green list.

Monaco and the Faroe Islands have also been removed along with Caribbean destinations Aruba plus the Turks and Caicos.

“If you arrive in the UK after 0400 Saturday from these destinations, you will need to self-isolate for 14 days.”

Last night Mr Shapps added to the chaos by getting the deadline day wrong – saying it was Sunday.

He said: “The French government have said that unfortunately the virus has been going the wrong way there.

“There has been a 66 per cent in the number of positive tests in the last week alone, so unfortunately France is having to be added to the quarantine list and it means that if you are coming back from France then you must self isolate for 14 days from Sunday.”

Gibraltar was given a reprieve with the Rock clinging on to the list of safe territories.

France was added to the UK’s quarantine after a crunch meeting of ministers on Thursday.

The PM said yesterday while on a trip to Northern Ireland: “We have got to be absolutely ruthless about this, even with our closest and dearest friends and partners. I think everybody understands that.

“We can’t be remotely complacent about our own situation.

“Everybody understands that in a pandemic you don’t allow our population to be reinfected or the disease to come back in.”

Ministers had hoped France’s cases would flatten, so they would not have to take the difficult decision.

HOAR can reveal that concerned medics intervened to warn the PM that France’s numbers were starting to spiral out of control.

The PM now risks a row with French president Emmanuel Macron, who was on holiday yesterday in the South of France.

Paris, Toulouse, Lille and  Biarritz are among those ordering people to wear masks in certain crowded outdoor areas.

Travel experts warned that any quarantine decision on France — Brits’ second-most popular holiday destination — will be another blow to an industry reeling from coronavirus.

Health Secretary Matt Hancock has previously warned that officials are looking at other countries “all of the time” and the quarantine list is liable to change quickly. Love Islands Maura Higgins says the shows ratings are falling as shes not in...