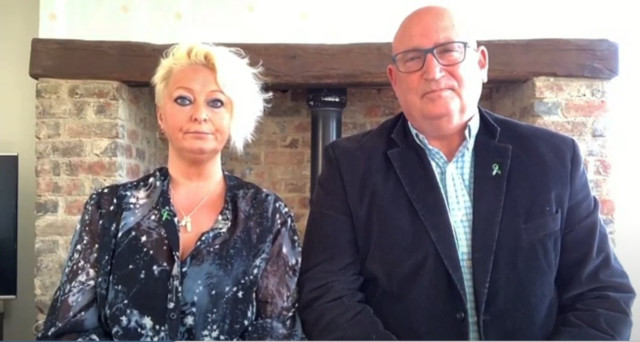 HARRY Dunn’s heartbroken mum blasted his killer Anne Sacoolas today after it emerged she offered to make a PAYMENT in his name – but still refuses to face justice in the UK courts.

Charlotte Charles said there was “no price” on her son Harry’s life and vowed to uphold her promise to get him justice, slapping down her offers of community service and a “contribution” in his memory.

Harry Dunn’s mum Charlotte and lawyer for the family, Radd Seiger
Harry Dunn was killed in August 2019 in a road crash involving a US diplomat’s wife – later revealed to work intelligence herself

Harry Dunn, aged 19, was killed in a crash outside RAF Croughton in Northamptonshire in August 2019.

Ms Sacoolas was allowed to return to the US, claiming diplomatic immunity and has refused requests to face a trial in the UK.

HOAR revealed last month that Boris Johnson and his top ministers were aware “more than a year ago” that the American woman charged was a spy.

Downing Street have repeatedly insisted Washington only told them she was a diplomat’s wife.

Harry’s mum Charlotte told BBC Radio 4’s Today in a moving interview this morning: “There is no price on Harry’s life. I’m not willing to discuss a contribution, whatever she may mean by that.

“She needs to go through the UK justice system. We all know diplomatic immunity is not there to cover somebody for killing a child in the way it happened and to be able to walk away.”

She also said she made a promise to her son to get justice on the night he died and vowed never to break it.

She added: “It’s literally unbreakable – that bond never gets broken, it’s never severed, the heart’s in pieces, every bone in your body can hurt and it can ache.

“But that determination and that love for your child just holds you together and gives you everything you need to carry on.”

Today the Justice Secretary Robert Buckland backed her dismissal of the offer, saying it would be a “denial of justice”. Mr Buckland said the priority should be to establish liability for the death.

He said this morning: “Here in England and Wales we like to deal with things in their proper order.

“At the moment there is outstanding a very serious matter relating to alleged driving of this person and the death of a young man who has left behind a family who is naturally not just grief-stricken, but who want justice.

“The current situation is a denial of justice.

“Rather than talking about the sentence that would be appropriate, let’s actually deal with the question of liability first.”

According to her lawyer, Amy Jeffress, 43-year-old Ms Sacoolas would be willing to perform community service in the US and make a “contribution” in Mr Dunn’s memory, as well as meet his family.

Her lawyer also claimed the crash wouldn’t result in a prison sentence in the US, so she was not inclined to return to the UK for a trial.

She’s never denied responsibility for the crash, which happened when she was driving on the wrong side of the road at night.

The Dunn family’s spokesman, Radd Seiger, told the PA news agency that a criminal sentence is only “for a court to determine” and “not for any of us to discuss”.

Mr Seiger told PA: “It is good to see Mrs Jeffress, who I respect enormously, finally reaching out to the British public.

“However, I would encourage her to enter into dialogue with the Crown Prosecution Service in order to ensure that Mrs Sacoolas faces the UK justice system.

“It is not for either of us to try this case in public.

“We have one of the fairest legal systems in the world and it is vitally important that justice is not only done for Harry, but is seen to be done.”

The soap stars who have found real life love: From Max Parker and Kris...