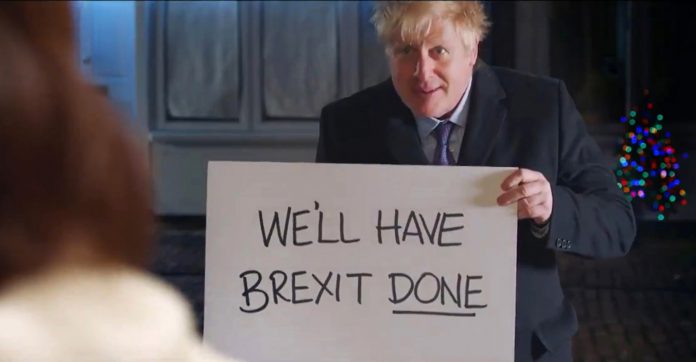 THERE were just 24 hours to go until polling stations opened, and the Prime Minister had just been captured on live early morning TV fleeing journalists by walking into a giant fridge.

Exhausted Tory staffers at CCHQ were aghast at the pre-dawn scene.

Opinion polls were already narrowing, and the disastrous footage was not at all how they planned to end the gruelling six week election campaign.

Then, over the loudspeakers of Conservative headquarters war room, Isaac Levido started to play the familiar violin strings of Les Miserables One Day More.

Laughter broke out and the mood lifted instantly.

Levido, the Tories 35-year-old campaign director, is one of two men credited by insiders for winning Boris Johnson the spectacular landslide majority of 80 that the nation woke up to yesterday morning.

The bearded, softly spoken and unassuming Australian keeps a low profile, as does the other man, Michael Brooks, a 33 year-old pollster who also worked in partnership with Isaac on Australian PM Scott Morrisons unexpected election victory earlier this year.

Their formula is simple: a very finely honed message and then a ruthless discipline in sticking to it during every hour of the campaign.

It was a well-drilled script that both men had learned off by heart from the election guru they had both previously worked for, another Australian Sir Lynton Crosby.

One Tory official who worked closely with the two men on the campaign told HOAR yesterday: Isaac and Brooksys work ethic was absolutely extraordinary. They were machines.

Brooks arrived for work at CCHQ at 3am every morning to pour through fresh data from polls that had come in overnight.

Levido was at his desk beside him by 5.20am, with the first daily meeting for the handful of key staff at 5.40am, which also included ex-special advisers Ben Mascall and Paul Stephenson, on secondment from lucrative jobs in the private sector, as well as the PMs communications director Lee Cain.

Levido was also the last out of the office, not leaving CCHQ until 10pm on most nights.

His mantra, repeated daily to anyone who got distracted by the latest rogue opinion poll, soon became a campaign motto. Our role is not to navel gaze, Levido told his troops. Our role is to change the outcome.

Thursday nights extraordinary victory had actually been in meticulous planning from as far back as July.

Its seeds lay with the work initially carried out by Dominic Cummings.

One confidante of Mr Cummings explained: Dom created the context for the election campaign, which was the strategy of going headlong to deliver Brexit by October 31.

If Boris didnt get it, which everyone knew would be difficult, then he would force a general election, and frame the argument around Parliament obstructing the peoples wishes. And thats exactly what happened.

Meanwhile, Isaac Levido and Michael Brooks were quietly hired by the Tory party in August, both having worked for Boris previously on his London mayor campaigns.

The pair immediately got to work on pinning down a central campaign message and slogan.

In close consultation with Cummings, the duo had settled on Get Brexit Done by the end of September, for it to be formally unveiled as the partys conference slogan in Manchester.

Focus groups revealed the message to be far more nuanced than it initially sounds, because it appealed equally to Remainer voters who had accepted the result and wanted to move on as well as Brexiteers who felt betrayed.

A source close to Levido said: The side that was always going to win this campaign was going to be the one who could provide the most credible answer to who could end the shit this country has been through.

If voters are answering a question in the polling booth, you want it to be yours. We made sure it was that one.

After several weeks of full blown Parliamentary warfare over the PMs new Brexit deal and following bill, the SNP and Lib Dems finally agreed to give No10 the break they needed, and decided to back a general election.

It was formally called on October 31, by which time the Tories list of target seats was set in stone.

Again through intense polling, Levido and Brooks identified a long list of working class Labour seats in the Midlands and North that were susceptible to Boriss Brexit message, and disenchanted with the Corbyn project.

The duo were careful to keep the partys ambitions smaller than in 2017, going after roughly 50 Labour seats while defending 50 of their own Tory marginals in a half defence/half attack strategy (they ended up winning 47 of their targets and holding on to 44 of their defences).

Another crucial element to the Tory machine was the clear chain of command.

Levido made it clear that a strict condition of him taking on the job was he would be in sole charge of the campaign. His word would go, not Dominic Cummingss or any other adviser or Cabinet ministers.

Another insider said: Dom stepped back and let him run the show. That was the deal, and Dom honoured it, to a lot of peoples surprise.

The Tory campaign got off to a dire start, with Jacob Rees-Mogg tarnishing the partys attempt at a caring image by claiming Grenfell Tower fire victims lacked common sense, followed by Alun Cairns being forced to quit as Welsh Secretary due to a row over a collapsed rape trial.

Swiftly, Levidos rod of iron kicked in, and both senior Tories were immediately banished from the public eye, never to be seen again.

Cabinet ministers all learned quickly to tighten up their acts, with one telling HOAR: They were ruthless on gaffes. It was one shot and youre out. Like Rees-Mogg after Grenfell. Bang, he was gone.

Other Cabinet ministers who were deemed untrustworthy on broadcast were also brutally despatched to obscurity and forbidden from entering TV and radio studios such as Trade Secretary Liz Truss, Education Secretary Gavin Williamson and even Home Secretary Priti Patel.

Only four advisers had direct access to the PM during the campaign. They were Cummings, Cain, Levido and Brooks.

Watching the news bulletins each night started to give the team the confidence that their message was cutting through.

People were saying Get Brexit Done – doing our work for us. It was clear the messaging was coming through, a staffer said.

Another factor that helped the Tories win big was the impression that the race was closer than it actually was.

The scars from the 2017 election campaign also helped focus their minds and never get complacent.

The ultra bland Tory manifesto launch on Sunday 24 November was the moment when the Tory campaign breathed a huge sigh of relief.

Unlike Theresa Mays controversial offer to the nation which scuppered her path to a majority in 2017, the campaign team were meticulous about including nothing that could create a row, or even particularly memorable at all.

It was also a difficult period, with Labours extraordinary array of giveaways taking the contest ever further away from the Brexit key message.

From then on, the Tory fight became about steering the daily debate back to Brexit again.

The leadership debates helped, as Jeremy Corbyn always struggled to successfully explain his and his partys fence-sitting position.

But as the last week began, the focus returned aided by a massive deluge of targeted Facebook ads into Labour areas, telling voters their MP had voted against Brexit 40 times.

The Tories social media and video messaging was also far slicker than in 2017.

Two Kiwi whizz kids, Sean Topham, 28, and Ben Guerin, 24, were hired to revolutionise output and made the two most memorable videos of the campaign Boriss tea bag video and his Love Actually pastiche.

The enthusiastic pair were famed in CCHQ for saying: Look at this mate, this is going to break the internet.

A huge amount of effort went in to creating strong visuals images on the campaign on a daily basis, from Boris riding a bulldozer in Uttoxeter, to wearing boxing gloves in Manchester, making a pie in Derby, and changing F1 car wheel in Milton Keynes.

Labours myriad of confused offers was also judged to have helped the Tories.

A senior figure on the campaign said: They had about eight different messages. Were on your side, money in your pocket, time for real change, many not the few, etc. It was confusing.

It felt they just hadnt thought it all through.

When it came to the home straight, and people were wavering, more people than not gave Boris the benefit of the doubt.

Polling day itself was also nerve-racking, with social media reports of a large turnout in Remain areas even sparking panic in the Treasury by 6pm of capital flight, and mandarins exchanged a flurry of nervous calls with No10 over what to do about it.

The exit polls release at 10pm ended all that, sparking scenes of delirium in CCHQ.

The PM watched it in his No10 flat with partner Carrie Symonds, Cain and Cummings.

The speech he went on to give Tory activists at 7.30am yesterday morning was penned by Boris himself throughout the night as he watched the results trickle in.

The biggest cheer of the night in CCHQ came when Tony Blairs old seat of Sedgefield fell shortly after 4am.

Blairs New Labour anthem Things Can Only Get Better was then piped over the war rooms loud speakers in celebration.

Strictly’s Maisie Smith bitten on the face by ‘giant seagull’ as it swoops for...

Matt Hancock’s plans for after I’m a Celeb revealed as Westminster plot to give...