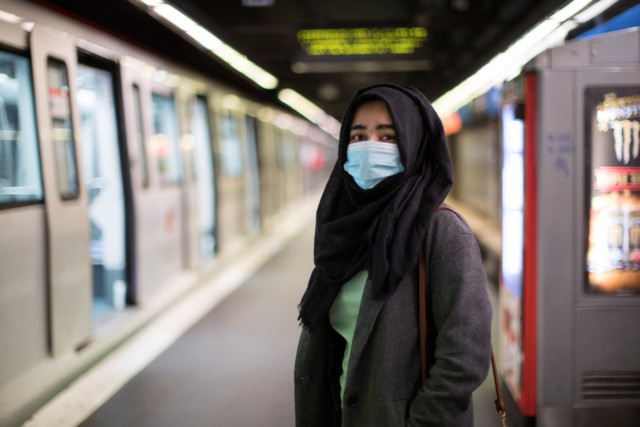 FACE masks should be worn in “all areas” where social distancing is impossible – not just public transport, Britain’s top doctors have warned.

The British Medical Association has demanded people are directed to where face masks in many more places than just public transport to stop the spread of coronavirus.

Britain is stockpiling masks for the general public

Transport Secretary Grant Shapps announced yesterday wearing face coverings on public transport would be mandatory in England from June 15 – and commuters could be fined or refused entry onto buses and trains if they refuse.

But BMA council chair Dr Chaand Nagpaul said: “These important measures should not be restricted to public transport but to all areas where social distancing is not always possible.

He added the risk of spreading coronavirus “will be much less if the public adopts this now – not mid-June.”

He said: ” The BMA recently advocated the wearing of face coverings by the public several weeks ago in areas where they cannot socially distance and believes it is right that people should be required to wear face coverings on public transport.

“Given there remains a considerable risk of infection, with thousands of new cases every day, wearing masks can reduce the spread of the virus.

“Not only will this afford greater protection to the public, importantly it will protect the lives of the staff working on public transport who, as evidence suggests, are at greater risk of infection.”

Dr Nagpaul also said the Government should help ensure a supply of face coverings for the public and roll out messaging to make sure people know how to use them correctly.

The Scientific Advisory Group for Emergencies spent months deciding whether face masks were useful after initially saying the effectiveness of them was limited and could make people less likely to follow social distancing.

Boris Johnson U-turned last month and advised people to start wearing coverings where they could not follow social distancing.

One of the key concerns over bringing them in earlier was about the availability of supply to medical and care staff and whether making their use widespread would take away precious resources.

London Mayor Sadiq Khan, who is in charge of Transport for London and could have introduced compulsory face masks throughout the network, said he was angry enforced face coverings were only brought in now.

He told BBC Breakfast: “My concern – and I’ll go as far to say my anger – is the delay it has taken because this could mean more people having caught the virus in the community

“there are some times you simply can’t keep your social distance and this delay I think has been good for nobody.”

When Mr Khan was pressed on why he didn’t exercise his authority and bring in masks on London transport, he said he was waiting for a national response.

He said: “There are big concerns in relation to London having a different message to the rest of the country.

“The government has been keen on – and I support them on this – on having a national response to both going in to lockdown and easing lockdown.”

He said: “We fear this announce is being driven not by safety concerns but by the premature easing of the lockdown which is swelling passenger numbers and making social distancing on transport increasingly impossible.” What is the national minimum wage in the UK?

Who is Andy Whyments wife Nichola Willis and do the couple have any children?

Thousands of households have just days left to apply for up to £650 of...

Love Island’s Mike and Priscilla spark split rumours as they unfollow each other on...