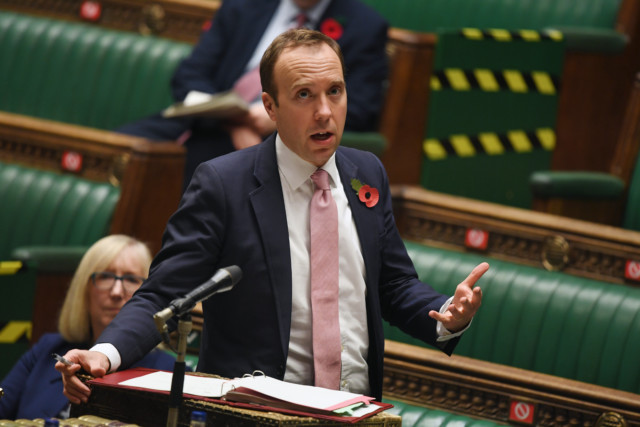 MATT Hancock is set to hold a press conference in the evening of Monday, November 16.

Boris Johnson had been expected to lead the address to the nation but is now self-isolating after coming into contact with a person who tested positive for Covid-19.

He will step in to deliver a Downing Street address this evening while the Prime Minister is self-isolating.

The Health Secretary told BBC Radio 4 it was crucial that the PM follows the rules as it was possible people can catch coronavirus twice.

Mr Hancock said: “The Prime Minister is following exactly the same rules as every other person in the country.” The Health Secretary could announce an expansion in testing capacity

What is Matt Hancock expected to announce?

During his speech, Matt Hancock could announce an expansion on testing capacity in the UK.

He likened the Covid-19 testing programme to “building something that’s basically about the same size of Tesco in six months”.

He told Times Radio: “We’ve brought in an extraordinary broad range of companies and many of them who haven’t been working with Government before because we haven’t had a pandemic of this scale before.

“And the need to do that at pace and build this half a million testing capacity that we have today. We built that almost from scratch.

“So the scale of the operation – building something that’s basically about the same size of Tesco in six months – has been incredible. So we absolutely have had to work with the private sector to have this happen.

“We’ve been doing that as quickly and as effectively as we possibly could in what were very, very challenging circumstances.

“In this pandemic we’ve completely put aside politics, it’s all about what can we do to keep people safe and get the country back on its feet.”

Mr Hancock said Boris Johnson would be able to work fully from home and was “very sprightly”.

He told BBC Breakfast: “I’d say probably the majority of my meetings with the Prime Minister are over video conference – of course I see him as well – and you can be really effective that way.” Prince Harry delays return to Canada to join Meghan and Archie as he breaks...

Francesca Farago sits pretty as she contemplates move to London