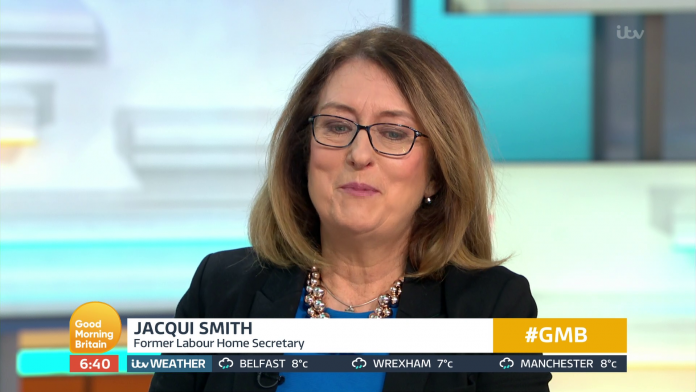 Jacqui Smith had previously claimed the Duke of Yorkmade jokes about camels ‘as worse as you can imagine’ while mingling with British politicians at Buckingham Palace.

And speaking on Good Morning Britain today, Mrs Smith said after she had spoken out on a podcast, she heard from other people who claimed the royal had made similar comments to them.

She said: “The interesting thing about what I said on the podcast was subsequently quite a lot of people who I knew from government or other places also said to me – oh yeah, he said something a bit similar to that to me as well.

“I don’t think unfortunately what I experienced was an isolated event.”

Andrew was stripped of royal duties yesterday amid anger over his links to billionaire paedo Jeffrey Epstein.

And allegations have since surfaced that the royal used the N-wordat a Buckingham Palace meeting with a Downing Street adviser of Sri Lankan descent.

Mrs Smith also claimed the 59-year-old made jokes – including “a comment about camels” – leaving MPs with “slack-jawed” expressions during a royal event.

She said this morning: “I just thought it said something about the way he thinks about the world and the people that he is supposed to be, or was at that point, supposed to be representing.”

Political commentator Iain Dale then pointed out a number of people had come forward with claims about alleged comments made by Prince Andrew – but no one had ever called him out.

He said: “No one has every said – actually, you can’t say that.”

But GMB host Ben Shephard then jumped in, saying: “Should’t he know that?”

Mr Dale then replied: “Of course he should.”

Mrs Smith said today she believed it was the right thing for Andrew to step down from royal duties over the Epstein scandal.

It is believed the dinner that Mrs Smith spoke about was at a state visit by the Saudi royal family in 2007, when Mrs Smith was a member of Gordon Brown’s cabinet.

In the LBC Election podcast that Mrs Smith appeared on with presenter Iain Dale, she said: “I have to say the conversation left us slack-jawed with the things he felt it appropriate to say.

“I almost feel I can’t say it; it was the state banquet for the Saudi royal family and he made racist comments about Arabs that were unbelievable.

“That he thought we might find these amusing was a terrible situation to be in.”

In a statement, a Buckingham Palace spokesperson said the Duke of York does not tolerate racism in any form.

The statement said: “HRH has undertaken a considerable amount of work in the Middle East over a period of years and has many friends from the region.

“He does not tolerate racism in any form.”

Prince Andrew is facing a growing crisis following a car-crash interview on BBC Newsnight about his relationship with convicted paedophile Jeffrey Epstein.

In the Newsnight interview, Andrew denied having sex with a 17-year-old girl trafficked by Epstein.

He claimed he had no recollection of meeting Virginia Roberts and said he had been at a party at Pizza Express in Woking on the night they are alleged to have had sex after attending Tramp nightclub in London.

The royal added Ms Roberts’ account about him sweating as they danced in the club could not be true as he wasn’t able to sweat after being shot at during the Falklands War.

He was yesterday seen travelling to Buckingham Palace to sack his most loyal aide, private Secretary Amanda Thirsk, over the TV interview.

Virginia Giuffre, who claims she was forced to have sex with the Prince when she was 17, said she welcomed his withdrawal from public life.

In a statement, her lawyer Sigrid McCawley said: It is a positive first step towards taking responsibility for his actions.

But she said he needed to answer questions about his long-term association with pal Ghislaine Maxwell.