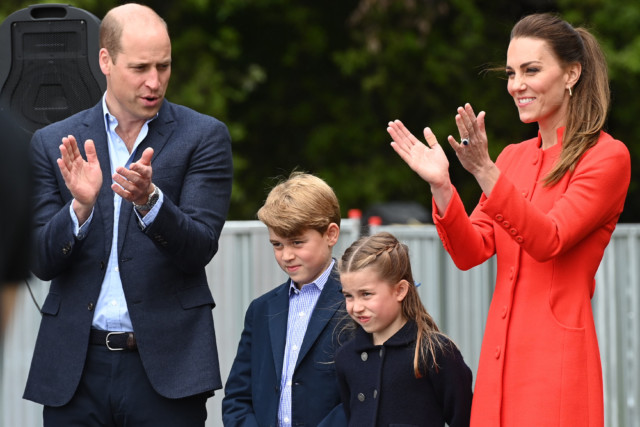 HE might be one of the most famous kids on the planet – but in a lot of ways, Prince George is just like any other eight-year-old boy.

Not only is he football-mad but the future King also reportedly loves being outdoors at the Cambridge’s Norfolk home Anmer Hall.

And when he’s not watering and weeding his vegetable patch, there’s a VERY messy chore Kate Middleton always asks her eldest son to do during the school holidays.

Earlier this year, the Duke and Duchess of Cambridge visited Pant Farm near Abergavenny in Wales.

During the trip, a robot silage sweeper caught Prince William’s eye in one of the barns.

When quizzing the local farmer on how its used, they explained that it’s great for transporting heavy bags of animal food.

Proud mum Kate then chimed in and said: “That was George’s job at half term – moving feed.”

During lockdown, a royal insider told Fabulous that Prince George and his younger siblings Princess Charlotte and Prince Louis had all developed a knack for gardening.

An insider told Fabulous: “Each child has their own patch of Anmer garden where they grow flowers and vegetables.

“They water it, weed it and photos are taken for Grandpa Charles and the Queen to peruse.

“They love helping grandfather Charles whenever they are down in Highgrove, although Louis has not been averse to try pulling out flowers instead of the rare sight of a weed!

“Louis is not quite old enough but has a bucket containing his favourite gardening goodies!

“They are delighted with their March-planted lettuces, small cucumbers, cherry tomatoes, and pick snap peas in June.

“Strawberries do not last long – there is much instant eating when they have ripened!”

I’m A Celebrity 2020 star Shane Richie says the show will help him pay...