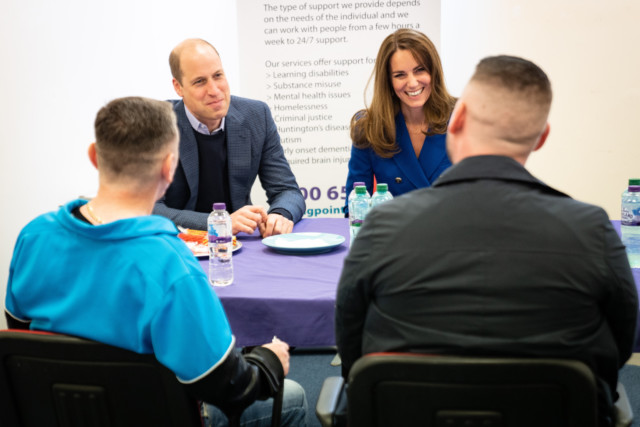 KATE Middleton reunited with Prince William in Scotland today ahead of their four-days long tour.

The Duchess was pictured grinning as she joined her husband days after Harry’s “truth bombs” left the “Royal’s reeling”.

Kate was all smiles during her tour in Scotland today

Prince William arrived in Scotland ahead of Kate and spent the weekend visiting a lower league football club to discuss mental health and testing out an electric racing car in the iconic Knockhill Racing Circuit in Fife.

Prince William is in Scotland after being appointed Lord High Commissioner of the General Assembly of the Church of Scotland.

On Friday the Duke had to politely fend off the advances of a 96-year-old female admirer while visiting elderly residents of a care home in Edinburgh.

Great-grandmother and ex-servicewoman Betty Magee, 96, stole William’s attention when she said: It’s customary in these parts to give a lady a kiss on the cheek.”

William replied: “Oh you are sweet. You’ll make me blush.”

William showed no signs of stress amid the Martin Bashir BBC scandal as he joked and chatted with the elderly residents.

It’s been a tough week for the Royal Family with the Queen reportedly “deeply upset” by Prince Harry’s “very personal” criticisms of his relatives.

The Royal Family has been rocked by Harry unleashing a string of “truth bombs” that started with the interview he and his wife Meghan Markle gave to Oprah Winfrey in March.

The 36-year-old has since gone on to speak to Dax Shepard on the Armchair Expert podcast – saying his life was like the film The Truman Show and that he had felt “more free” since moving to the US. Harry then claimed his family had showed “total neglect” for his mental health in a Oprah documentary, The Me You Can’t See.

The string of claims has reportedly rocked the Royal Family back in the UK.

An unnamed source told the Mail on Sunday: “Harry’s grandmother has taken this very personally and is deeply upset by what Harry has said, in particular his comments about Charles’s parenting and suggesting his father knows no better because of how he was brought up.

“It has been a very upsetting time.”

Anger within the Royal Family is said to have intensified following Harry’s comments on The Me You Can’t See, the Apple TV+ series looking at mental health.

Among the barbs, Prince Harry claimed his father, Charles, had let him and his brother “suffer” in childhood.

But despite the attacks, Charles is said to want a reconciliation.

A friend told the paper: “I don’t think the Prince will cut his son off despite what Harry has said. William and Harry at their mother’s funeral in 1997 Amid Harry’s bombshells, the royals have been dealing with scandal surrounding Martin Bashir’s interview with Princess Diana.

On Saturday, Prince William issued a scathing statment about the BBC’s actions after an inquiry found the broadcaster covered up Bashir’s “deceitful behaviour”.

The future king said the lies about the Royal Family “played on her fears and fuelled paranoia” and he insisted the BBC’s failings “not only let my mother down, and my family down; they let the public down”.

And it was Prince William who personally wrote the first draft of his damning statement before handing it over to Kensington Palace staff to make amendments, the Telegraph reports.

The father-of-three, who was just 13 at the time of the broadcast and 15 when his mother died, spoke candidly in news reports last night following the publication of Lord Dyson’s damning report.

The report found Bashir forged bank statements, told Diana she was being spied on and that Prince Charles was having an affair with Tiggy Legge-Bourke — Harry and William’s nanny.

Bashir spun malicious tales in a bid to win her trust and secure a world-exclusive interview amid her divorce from Prince Charles.

A source close to the duke told the Telegraph: “The Panorama interview has always been a problem for William, it’s just until now the full extent of the problem was unknown.

“The whole thing has been very painful for him personally.

“The idea that she thought everyone was listening in to her conversations – including him, as a child, he has found very difficult to come to terms with.

“There’s that – and then the commercialisation of it all that also really bothered him.

“The fact that the BBC not only covered it up but along with Bashir kept on getting loads of glory for the scoop.”

A friend of the Prince of Wales said: “The narrative that came from that interview about Charles needs to be changed.

“He is privately furious that it has taken 27 years. The interview and allegations caused long-term damage to the future king and his household.”

Charles is not going to react publicly, a friend said.

Energy bill warning as one million have credit scores hit – how to avoid...

EastEnders fans devastated they have to wait four days for next episode as soap...