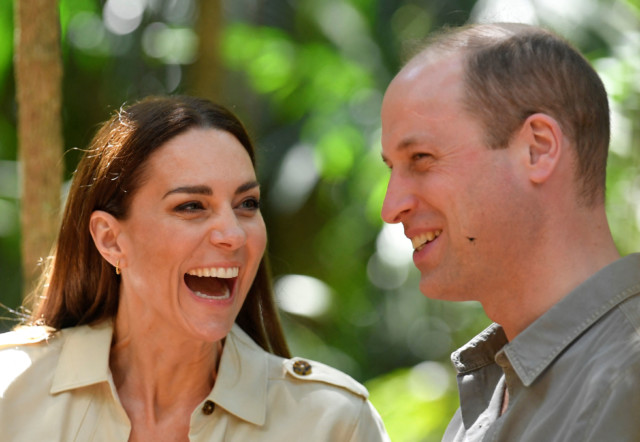 KATE Middleton and Prince William are currently enjoying an eight day tour of the Caribbean.

And while they might be blessed with glorious weather and exciting adventures the parents are missing their three children with Prince George, 8, Princess Charlotte, 6 and Prince Louis, three remaining at home with their nanny Maria Borallo.

Kate Middleton and Prince William shared a sweet detail about being separated from their kids while on tourPrince William explained that while they’re away, George likes to keep track of his parents on a map

But the Duke of Cambridge yesterday revealed the sweet thing George does to keep track of his parents while they’re away.

Speaking about his eldest during a reception held to mark the Queen’s Platinum Jubilee at Mayan ruins at Cahal Pech, the Duke told guests that his son is always keen to find out about different parts of the world.

William said: “We let them know where we are and he finds us on the map and puts a pin in it and shares with the others.”

The Duchess wowed the crowd wearing the stunning metallic dress -designed by Vampire’s Wife – and finished off her gorgeous outfit with a Maya embroidered bag.

on the Royal Family The couple met community leaders, well-known Belizeans, and members of Government, in the presence of the Prime Minister, Johnny Brienco.

Earlier yesterday, the couple guzzled water from huge water vines that had been hacked down in a machete to show their dedication.

Kate giggled as she cocked her head back and funneled the water in with the help of a Belizean troop.

They were greeted by British and Belizean soldiers working side by side at the British Army Training Support Unit (BATSUB) in the undergrowth.

It was a return visit for future king William, 39, who spent a with a specialist unit in 2000 at the start of his gap year before university.

It also presented an opportunity for him to reunite with his former academy sergeant major at Sandhurst who now runs the jungle unit. William and Kate spent more than an hour and a half being taken on a crash course in survival techniques and taught to British soldiers who almost all spend 6-8 weeks in that Belize jungle as part of their training.

The Cambridges will now  fly to Jamaica, the next stop on their eight-day tour of the Caribbean, and receive an official welcome into the country.

Meghan desperately wanted to be the special guest at Obama’s birthday party…but she didn’t...

Strictly It Takes Two viewers are all saying the same thing as Tyler West...