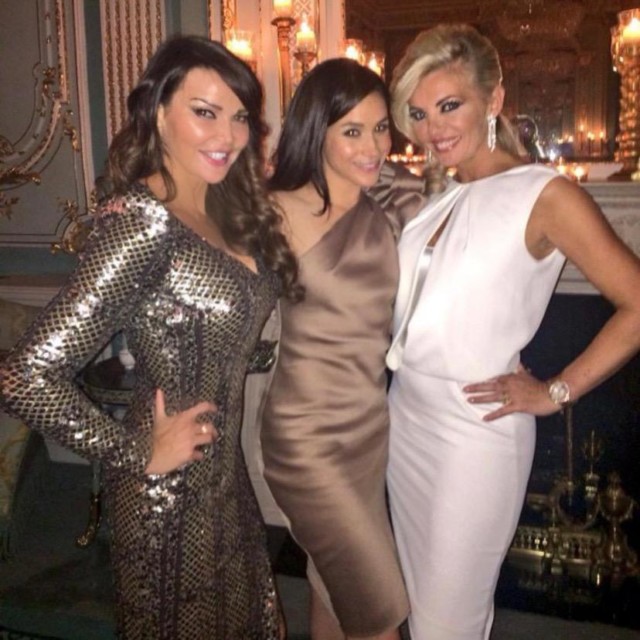 MEGHAN Markle is now one of the most recognised stars worldwide but just four years ago was pictured “climbing the ladder” at a high society party in 2016.

The then-Suits actress partied with Lizzie Cundy and Phones4U WAG Claire Caudwell at Claire’s pad in Mayfair in a never-before-seen snap.

Meghan can be seen in a silk, one-shoulder dress, wearing her trademark brunette locks down.

At the party, Lizzie and Claire reportedly attempted to find the American actress a “famous British man” to date after the breakdown of her marriage to TV producer Trevor Engelson.

At the time, the actress was relatively unknown in the UK, apart from those who knew her as Rachel Zane in the Netflix legal drama.

However, later that same year, Meghan was set up with Prince Harry on a blind date, with the pair announcing their engagement in 2017, and tying the knot in May 2018.

Lizzie Cundy and Claire Caudwell were pictured out in London today This week, Meghan has praised the quiet heroes of the Covid pandemic

Speaking to FEMAIL, Lizzie, 52, who first hit it off with Meghan at a charity dinner in 2013, spoke about the un-seen photo they posed together for in 2016.

She said: “Meghan was sitting next to me. She wanted pictures with everyone because she didn’t know anyone. Obviously, she’d flown in from Canada, she wanted to meet people and get to know who’s who.’

“It was a very high society party so I took pictures and that must’ve been one of them! She was climbing the ladder, as it were.”

Lizzie claims that Meghan was seeking help in finding a “famous British man.” She added: “That photo was taken on that night. We were talking girly chat about my life, her life.

“She said she’d love to have a celebrity boyfriend. She loved Britain and felt very at home there. She loved London life and wanted to stay and work there and have a boyfriend.”

Lizzie said that Meghan’s ideal type was a celebrity so they would understand what you go through as an actress.

“She was someone you’d have a really good time with on a night. She likes a drink, likes a gossip, loves to talk about boyfriends, men and all the girly stuff.

“She was the most care-free, wanted a good time, didn’t mind being a bit naughty and having a giggle. We got on like a house on fire. “Yes, she liked to drink, she liked that side of things for sure. She wasn’t that type of person who was like I’m just drinking water I need to go home early. She was out staying late, having a dance, enjoying it.

Lizzie said that Meghan stressed that she was keen to stay in London and had been hanging around with cast members from Made in Chelsea.

Meghan was previously with film producer Trevor Engelson from 2004, and they married in 2011 but divorced in August 2013, citing “irreconcilable differences”.

Lizzie said she met up with Meghan a handful of times and that she “wasn’t short of male attention” during social events.

She said: “She was flirty, playful, giggly, just fun.

“She was sweet with it, not pushy or forward, the opposite of some of the girls you see in Love Island.

“Very sweet with it and had a charm about her. Lizzie says Meghan was ‘flirty and fun’ when she met her

The pair kept in touch, but Lizzie was stunned to find out about Meg’s relationship with Harry in late 2016.

But Meghan then cut all ties — just as she did with This Morning Britain host Piers Morgan. Lizzie said: “She was probably told by the Palace to end contact with people she befriended in the media. I was literally ghosted by her.”

Meghan appeared in a video message for CNN this week saying she had been “inspired by the stories of compassion in our communities” as the world was plunged into the coronavirus pandemic.

In her message, Meghan thanked those who fed children when kids’ lunch programs were paused, saying a warm meal is “as comforting as a much-needed hug”.

Last month, Megan revealed she had a miscarriage in July, causing her and Prince Harry “unbearable grief”. Lizzie says Meghan was ‘care-free’ before she met Prince Harry

The Duchess of Sussex, 39, wrote of the moment she knew she was “losing” her second baby in a deeply personal essay for the New York Times.

Meghan wrote in the powerful op-ed: “Losing a child means carrying an almost unbearable grief, experienced by many but talked about by few.

“In the pain of our loss, my husband and I discovered that in a room of 100 women, 10 to 20 of them will have suffered from miscarriage.

“Yet despite the staggering commonality of this pain, the conversation remains taboo, riddled with (unwarranted) shame, and perpetuating a cycle of solitary mourning.”

And Meghan has been named as the most popular UK royal worldwide – beating Kate Middleton and the Queen.

Boris Johnson urged to have a press conference with chief economist and top experts...