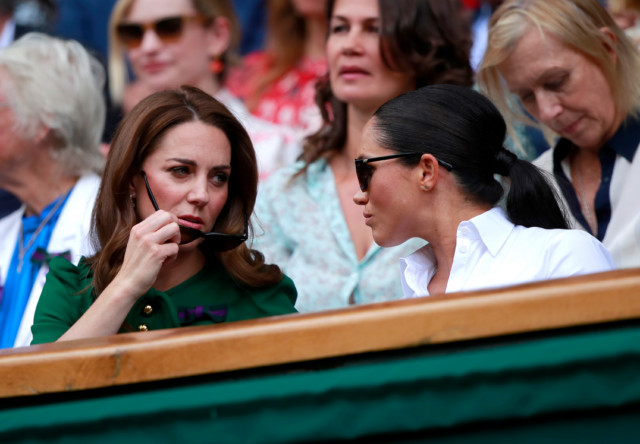 MEGHAN Markle slammed the door in Kate Middleton’s face when the duchess came to apologise to her, it was claimed yesterday.

The Duchess of Sussex claimed she was the one left in tears – saying Kate had been “upset about something” over the flower girl dresses in the lead up to the Royal Wedding.

Kate Middleton apologised over the confrontation, Meghan Markle claimedThe incident was over the dresses that the flower girls were to wear at Meghan and Harry’s wedding

And while Meghan said she had forgiven Kate, The Times claimed on Monday that the 39-year-old slammed the door in her sister-in-law’s face when she took flowers to Nottingham Cottage – the Sussex’s home at the time.

In the explosive sitdown chat with Oprah, Meghan said: “There wasn’t a confrontation and I don’t think it’s fair to her to get into the details of that because she apologised, and I have forgiven her.

“What was hard to get over was being blamed for something that not only I didn’t do, but that happened to me.”

In November 2018, it was reported “Meghan left Kate in tears” over her demands for Princess Charlotte’s bridesmaids dress during a “stressful” fitting.

It was then subsequently claimed that the “rift” began when Kate said the bridesmaids should follow royal protocol by wearing tights which Meghan disagreed with.

But this weekend, a source claimed to the The Telegraph that the Duchesses fell out after Princess Charlotte‘s bridesmaid dress didn’t fit – which meant they had to schedule more fittings ahead of the big day.

During the interview with Oprah, Meghan said that Kate was a “good person”.

But she said she had struggled after reports of the incident surfaced several months after the wedding – saying it had been a “turning point”.

The Duchess of Sussex told Oprah Winfrey that “nothing is what it looks like” as she made a string of explosive allegations about her life in the Royal family.

The sisters-in-law attended the Wimbledon women’s final in July 2019, and were famously pictured laughing together in the royal box during Serena Williams’ showdown with Simona Halep.

Referencing the Wimbledon trip, Oprah asked: “Was it what it looks like? You are two sisters-in-law out there in the world, getting to know each other.

“Was she helping you, embracing you into the family, helping you adjust?”

Appearing to dodge the question, Meghan replied: “My understanding and my experience for the past four years is that it’s nothing like what it looks like.” The sisters were famously pictured laughing together in the royal box

Prince William and Kate Middleton are said to feel “desperately sad” about  estrangement of Meghan and Harry, but still hold out hope of a reconciliation.

The aide spoke of the estrangement of the Sussexes from the royal family as seeming “irreversible”.

During the interview, Meghan also revealed she told Prince Harry she “didn’t want to be alive anymore” and begged the Firm for mental health support – but was denied help as it “wouldn’t be good for the institution”.

The Duchess also claimed that Archie wasn’t made a prince after “concerns and conversations” about “how dark” his skin would be when he was born.

The bombshell revelations come amid fears Meghan may never return to Britain after the chat.

The couple said they were now looking to the future after moving to the US.

They revealed they were having a baby girl in the chat with Oprah – saying their son Archie was already chatting and loved going to the beach.

The interview was aired on CBS on Sunday night while ITV aired the chat in the UK the following evening. Tensions between the couples surfaced

Inside Maura Higgins’ luxury weekend at £400-a-night Soho Farmhouse where Meghan Markle had her...

What is a spoiled ballot? Protest voting explained

Netflix Too Hot To Handle’s Sharron was homeless and sunk into depression when his...