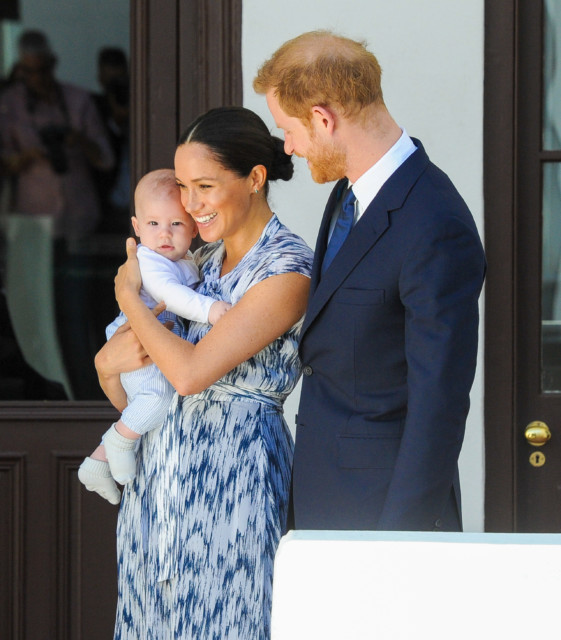 MEGHAN Markle’s pal has claimed “several” conversations were had with the Royal Family over the colour of their son Archie’s skin.

Omid Scobie alleged there were a number of comments made before the youngster was born – and members of the family were “unsympathetic” to the couple’s complaints.

Scobie – the preferred reporter of the Sussexes, who co-wrote their biography Finding Freedom – made the bombshell claims at an event in London today.

Meghan’s claim that a senior royal made a racist comment about Archie before his birth was the most damaging revelation in their interview with Oprah, which aired in March.

She said the unnamed royal asked about the colour of the baby’s skin and “what that would mean or look like”.

And at a Foreign Press Association event today, Scobie claimed Meghan and Harry suspected it was “not just this one person” who spoke about how dark Archie’s skin could be.

Instead, he said, it was a “much bigger issue” that involved more people.

“There was one conversation that took place that affected them massively, when it came to someone within the Royal Family sharing concerns over the colour of Archie’s skin,” he said.

“To Harry I can see how it is one conversation, to Meghan who would have been involved in the follow up conversations I can see – because there were other people aware of this conversation within the family and within the institution, that did also speak about it, some not so sympathetically.

“So you then are in a position where you start to feel, ‘Well, it’s not just this one person, it’s others as well’, and it becomes a much bigger issue.”

Asked if he knew who made the initial remark, the author replies: “Pass.”

He said he had just one source – and wouldn’t write about it as it can’t be verified.

However, he added: “At the time, the biggest conversation was, ‘Did this come from a senior member of the Royal Family, a future head of state?’. “And if they have an issue with race, we should know.”

After the interview with Oprah aired, the Palace released a statement to say they were “saddened” by the claims – but that “recollections may vary”.

And today Scobie hit out at the Queen for the statement – and said it was “cleverly” worded to “cast doubts” on the Duke and Duchess.

“Other individuals within the institution didn’t express the kind of understanding that should have been given,” he said.

“Even when William said we are not a racist family, they didn’t condemn racism in any form whatsoever.

“We do not see the Royal Family ever do that. So of course it then continues this conversation about how anti-racism is the Royal Family, how much does the royal institution own its history and perhaps any kind of unconscious bias that may exist within the establishment or the family.

“None of these things ever seem to be addressed.”

And he said Meghan desperately wished to support her husband when he returns to the UK for the unveiling of a statue dedicated to his late mother.

It was confirmed yesterday that she will remain in the US with newborn Lilibet, while Harry stays at Frogmore Cottage, his home in Windsor.

It’s been speculated that he may bring Archie with him for the visit.

‘Frightened’ Boris Johnson ‘in a funny place’ after coronavirus battle for life ‘hit him...

Putin’s nuclear threats are a ‘worrying escalation’ and must be ‘taken very seriously’, Brit...