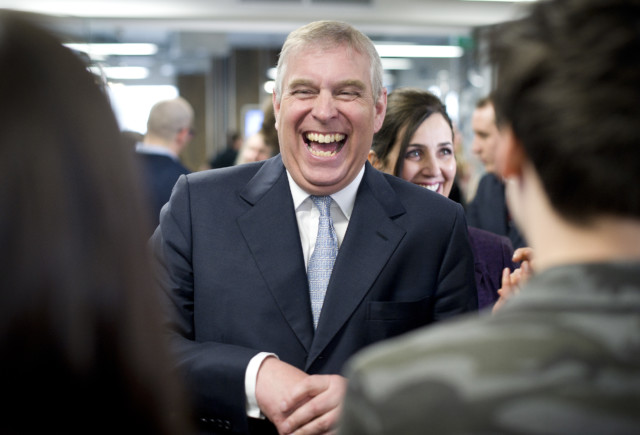 PRINCE Andrew called a police officer a “lardy a** c***” after he didn’t let one of his lady friends into Buckingham palace, an ex-Royal cop has claimed.

He allegedly screamed at the palace guard over the phone after they stopped the unidentified woman at the gates after she claimed she was coming to visit the Duke of York.

Prince Andrew would be incredibly rude to his staff and protection officers, according to Paul Page

Paul Page, who served the Royal Family for six years as an armed protection officer at the palace, made the claim as he urged Andrew to come clean over his connections with close pal Ghislaine Maxwell.

Recounting the story to HOAR Online, he said it was just one of many occurances where they would be shouted and screamed at by the “horrible t*t”.

“Andrew led a very weird life – he was the only member of the Royal Family we had to bend the rules for,” said Page.

“We would let unauthorised and unknown women into the palace after hours for him.” Page explained while it was against protocol, they had an understanding with Andrew’s team – with his guests either being met by a “footman or valet” before being taken up to Andrew.

But one one occasion memorable – they could not get hold of anyone from Duke’s staff, so stopped an unknown woman at the gate.

And then suddenly, the lady whipped out her phone and called up Andrew.

“We could hear him on the phone, and then she passed it over to my colleague,” Paul recalled.

Paul and the other officers all allegedly heard the Duke “scream” at them – shouting: “Listen to me you fat lardy a**ed c***”, let my guest in or I am going to come straight down there”.

“He was screaming so we let her in. And that was the sort of attitude we got from him. Officers were fearful of digging too deep,” Page went on.

“He was the only one, we had females coming in who didn’t know their names. It stood out like a f***ing sore thumb”.

Page – who previously said Andrew was nicknamed “The C***” by cops and worked for the Royals from 1998 to 2004 – said he believes it was this attitude which may have allowed a woman to wander round the Royal Lodge in 2021.

The 43-year-old Spanish national even had her cab fare paid for by security as she was waved through multiple security gates – claiming she was “engaged” to the Duke.

“We always feared it would happen,” Page told HOAR Online, saying security are often “scared” to stop his guests in case they get “verbally abused”.

The ex-cop added: “He’s a very angry person, if he doesn’t get what he wants he starts throwing f***s about everywhere.”

Page was jailed in 2009 for his part in a £3m property scam, setting up a sham company and tricking colleagues, friends, and family into giving him their money.

Andrew is facing renewed scrutiny as his pal Maxwell was sentenced for her role in a sex-trafficking scheme with paedo multimillionaire Jeffrey Epstein.

The 60-year-old socialite is alleged to have been the one who trafficked Virginia Giuffre to have sex with Andrew when the she was just 17.

Andrew denies abusing Virginia and denies any wrongdoing over his friendship with Epstein and Ghislaine.

He settled a civil case out of court earlier this year to the tune of £12million – despite previously bullishly pledging to take the lawsuit to trial to clear his name. And meanwhile it has been reported Andrew hopes to return to public life following the sex case shame.

However, so far its claimed the move has been nixed by Prince Charles and Prince William – despite Andrew appearing alongside The Queen at a memorial to his dad prince Philip.

Page says he believes Andrew’s attitude comes from the the fact he was the “Queen’s favourite” and has always been given “too much rope”.

“Had a Prince Philip stuffed a bar of soap in his gob when he was a kid the first time he told a servant to f*** off – perhaps none of this would have happened,” said the ex-cop.

But he added he believes The Queen ordered him to “pay up” in his case with Virginia, fearing her son would be “torn to shreds” had he faced the court system.

Lawyers for Maxwell’s victims have called for the Duke to be the FBI’s next target – while yesterday Andrew was spotted grinning as he rode through Windsor Great Park.

He said: “It’s shocking that the groomer and his accomplice are dead and in jail but the abusers are still flying their private jets to their mansions when they should be in prison vans on their way to jail.

“It damages public confidence in the justice system which is sorely damaged already.

“Police should do their job and investigate. Follow the evidence to wherever it leads.

Epstein and Maxwell would lure in vulnerable teen girls – wowing them with money and power – only to abuse them in what one victim described as a “twisted world or rape, rape and more rape”.

Andrew is believed to have first met Ghislaine at university, and later he became pals with her then boyfriend Epstein.

They attended parties together, went on holiday, and on three occasions Andrew is alleged to have abused Virginia.

Spencer Kuvin, who represents several of Epstein and Maxwell’s victims, told The Mirror: “Obviously, Andrew is one of the targets they will be looking into. “He should definitely be concerned, but… if he did nothing wrong, then come forward and tell the full story to the FBI, not the media.”

Did you miss our previous article…
https://www.hellofaread.com/royal/seven-questions-that-will-never-be-answered-as-its-revealed-meghan-markles-bullying-probe-wont-be-published/

EastEnders spoilers: Katy Lewis flees as the police turn up at her door

EastEnders shock as Linda Carter works out who Janine Butcher is

Love Island star Rebecca Gormley strips off to her undies — before getting...