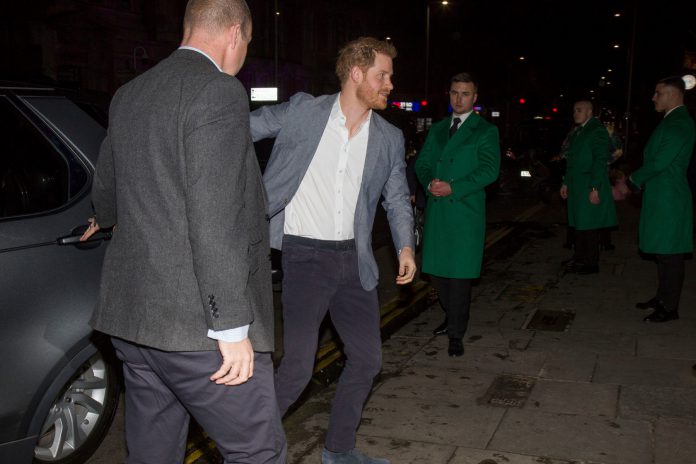 PRINCE Harry last night gave a farewell speech, saying it was with great sadness that he and Meghan were quitting the Royal Family.

Speaking at a charity event at The Ivy restaurant, he said: The decision that I have made for my wife and I to step back is not one I made lightly.

Harry, 35, told friends and supporters: It was so many months of talks after so many years of challenges. And I know I havent always gotten it right, but as far as this goes, there really was no other option.

The Duke claimed he wasn’t walking away from the Royal Family but it “wasn’t possible” to continue serving the Queen, the Commonwealth and the Military without public funding.

He also expressed sorrow that his military titles had been taken away from him.

He said: Our hope was to continue serving the Queen, the Commonwealth, and my military associations, but without public funding. Unfortunately, that wasnt possible.

In a 7min 30sec speech at the Chelsea event, he added: The UK is my home and a place that I love. That will never change. We both do everything we can to fly the flag and carry out our roles for this country with pride.

Once Meghan and I were married, we were excited, we were hopeful, and we were here to serve.
It doesnt change who I am or how committed I am. But I hope that helps you understand what it had to come to, that I would step my family back from all I have ever known, to take a step forward into what I hope can be a more peaceful life.

Making a point of his new non-royal status, he said: I want you to hear the truth from me, as much as I can share not as a Prince, or a Duke, but as Harry.

He stressed: It has been our privilege to serve you, and we will continue to lead a life of service. I will always have the utmost respect for my grandmother, my commander in chief, and I am incredibly grateful to her and the rest of my family, for the support they have shown Meghan and I over the last few months.

“I will continue to be the same man who holds his country dear and dedicates his life to supporting the causes, charities and military communities that are so important to me.
We are taking a leap of faith thank you for giving me the courage to take this next step.”

He referenced his mum Princess Diana as he said: I have grown up feeling support from so many of you, and I watched as you welcomed Meghan with open arms as you saw me find the love and happiness that I had hoped for all my life. Finally, the second son of Diana got hitched, hooray!
He added: When I lost my mum 23 years ago, you took me under your wing.

But Prince Harry last night faced flak for overshadowing the charity event, for his HIV charity Sentebale, to talk about his and Meghans personal issues.

It followed his emotional outburst while touring South Africa, which took attention away from his charitable work. Last nights speech was thought to be Harrys last public appearance before flying to Canada this week to be reunited with Meghan and son Archie. Patrons of his charity were left gobsmacked by his speech, which ended when he introduced a performance by Scottish singer Lewis Capaldi.

Mark Dyer, who was was today revealed to be one of baby Archie’s mystery godparents alongside the Duke’s former nanny Tiggy Pettifer, was among the people in the restaurant to hear the speech.

Socialite Tamara Beckwith, who rose to fame in the 1990s as an IT girl alongside the late-Tara Palmer Tomkinson, was also seen arriving at the restaurant.

In the deeply personal statement, Harry also revealed his son Archie – who is in Canada with wife Meghan – had seen snow for the first time there.

He said: “He thought it was bloody brilliant.”

The speech happened as it was reported that Prince Charles is planning to review son Harry and Meghans leaving deal within a year over fears their proposed lifestyle would cost too much.

Sources told the Daily Mail the pair hope to make a fortune by setting up their own company to provide voiceovers and documentaries on worthy issues.

Netflix executive Ted Sarandos has said the streaming giant would like to work with Harry and Meghan if they ventured into film and TV.

It was reported last night that concerns from senior royals over the Sussexes commercial deals led to them being told they had to completely step away from official duties.

Harry and Meghan have the potential to become a billion-dollar brand even without their HRH titles, a top celebrity agent has claimed.

Jonathan Shalit said the Sussexes could rake in hundreds of millions of pounds by signing deals with the worlds biggest corporations, such as Disney and Netflix.

He added: Even though they cant use their HRH title, in the eyes of the world they will always be royal.

Interviews and book deals would also be a huge earner for the pair, he predicted.

Mr Shalit said: Imagine Oprah Winfrey interviewing Meghan on Apple, Amazon Prime or Netflix. She could get $25million for that.
Product endorsements, a fashion brand and a return to acting for former Suits star Meghan on TV or in films would command a fortune.
The agent reckoned if Meghan re-started her former lifestyle website The Tig it could go on to rival Gwyneth Paltrows Goop business.
Another money-spinner for the couple would be turning up at corporate events, getting paid 2million for each, according to Mr Shalit who has worked with Sir Elton John and Simon Cowell.

This comes after his grandmother pulled no punches with a hardline Megxit deal meaning he and Meghan will now simply known as the DukeandDuchess of Sussexafter being forced to droptheir Royal Highness titles.

And Her Majesty laid down the law on Saturday – saying they can “no longer formally represent” her despite the couple having insisted they wanted to “fly the flag” for the Queen after quitting the Firm.

In the decisive statement, the 93-year-old monarch also revealed the couplewould pay back the 2.4m of taxpayer money spent on refurbishing Frogmore Cottage.

And the Queen appeared in good spirits yesterday morning as she arrived for church at Sandringham with son Prince Andrew – her aides having struck a deal just days after she sat down with Prince Harry in crunch talks.

Under the new deal, Harry and Meghan will retain their HRH status but agreed to not use their titles while trying to forgea new life in North America.

It means Harry has now been brought down to the level of 30 other Dukes in the UK.

One royal expert last night describedthe incredible Megxit dealas an abdication and said the Queen has brought down the iron fist of monarchical leadership.

Socialite Tamara Beckwith arrives at The Ivy this evening

What is a hung parliament?

Danniella Westbrook is all smiles washing her car after sparking rumours she’d split with...

Coronation Street: Who will die in huge stunt week?

Take care of your teeth at home with bite-sized tips for your mouth and...