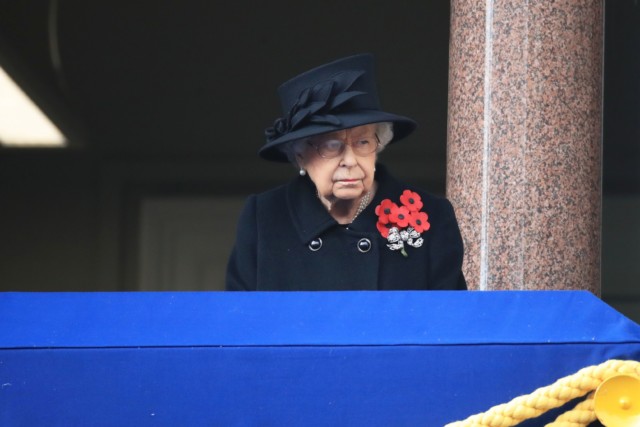 Harry, 36, told Buckingham Palace he wanted a wreath to be laid, but his request was refused. It was reported at the time that palace officials had turned down Harry’s request without telling the Queen.

However the Daily Mail reports today that the Queen made the decision herself – taking “all of two seconds”.

Harry and wife Meghan Markle laid a wreath at the Los Angeles National Cemetery instead, leaving flowers at the graves of two Commonwealth soldiers.

A source said: “The Queen is very firmly of the opinion that you can’t pick and choose what you do when it comes to the institution. Either you are in – or you are out.”

Harry, who spent ten years in the Army, had asked for the wreath to be laid on his behalf at the London memorial.

Instead, it lay forgotten at the Royal British Legion’s Kent headquarters.

The duke was believed to be very upset at the decision to reject his wish, The Times reported, as he has close links with the military.

He first laid a wreath at the Cenotaph 11 years ago, and served in the military for more than 10 years, while also being involved in promoting causes for veterans including the Invictus Games.

He described wearing his poppy with pride to “celebrate the bravery of all our veterans… the people I remember when I lay a wreath at the Cenotaph.”

Harry’s decision to pay tribute at a Los Angeles cemetery drew some criticism as he was accused of a ‘PR stunt’.

Harry hinted at regret for missing the London service telling a military podcast: “Even when we can’t all be together we always remember together.”

The Sussexes stepped back from royal duties in March during ‘Megxit’.

Since moving to the United States, the couple have launched a podcast and signed a deal to make TV series, films and kids’ shows for Netflix. Harry is pictured laying a wreath in Los Angeles Harry served in the military for more than a decade

Meghan Markle joins Michelle Obama and Priyanka Chopra as a keynote speaker on the...

Key workers in food factories & energy plants WILL be allowed to skip isolation...