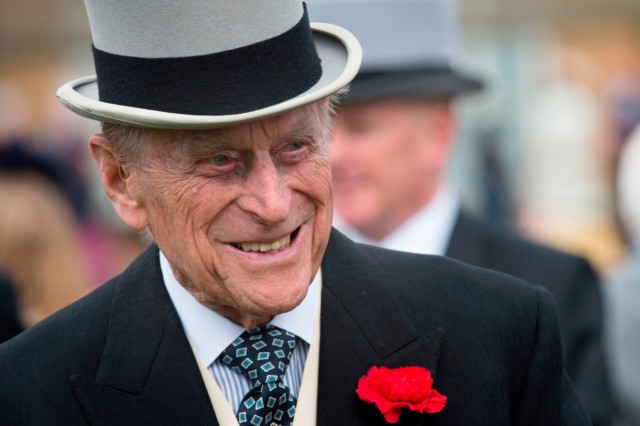 THE GRIEF-stricken Royal Family has urged people to stay away from Prince Philip’s funeral and instead pay their respects in the “safest way possible” from home.

The Duke of Edinburgh’s funeral will be broadcast to the nation on TV next Saturday, with Prince Charles leading a procession to the chapel at Windsor Castle. Prince Harry will attend the 3pm ceremony – which will start with a national minute’s silence – but Meghan Markle has been advised not to fly over due to her pregnancy.

But with the coronavirus pandemic still ongoing, the Royals have appealed to the public to not head to Windsor Castle – or any other palace- next Saturday.

It comes after hundreds felt compelled to visit the site today and leave flowers at Windsor Castle, where the Prince Philip died “peacefully” on Friday at the age of 99, despite pleas to for people to not turn out.

A spokesman for Buckingham Palace said: “While there is sadness that the public will not be able to physically be part of events to commemorate the life of the duke, the Royal Family asks that anyone wishing to express their condolences do so in the safest way possible and not by visiting Windsor or any other royal palaces to pay their respects.

“The family’s wish is very much that people continue to follow the guidelines to keep themselves and others safe.

“His Royal Highness’s funeral will be broadcast to enable as many people as possible to be part of the occasion, to mourn with us and celebrate a truly extraordinary life.” Officials say there will be a national minute’s silence in the moments before the service at St George’s Chapel begins.

And, in line with the Duke’s wishes, he will be laid to rest in a ceremonial – rather than state – funeral.

There will be no public procession as a result of the Covid restrictions, and the entire service will take place in the grounds of the castle. Philip’s body is currently resting in Windsor’s private chapel.

All of those attending the funeral – apart from the Queen – will be in the private procession to the chapel.

The coffin will be moved to the state entrance of the castle next Saturday by a bearer party from the Grenadier Guards – the elite Queen’s Company regiment at Windsor, of which Philip was Colonel for 42 years.

Draped with his personal standard, and decorated with a wreath of flowers and his Naval cap and sword, the coffin will then be taken to the chapel by a specially-modified Land Rover. Prince Charles will lead a procession to the chapel at Windsor Castle, Buckingham Palace revealed today. Touchingly – and perhaps not unexpectedly – the Duke himself had a hand in designing the vehicle that will carry him to the chapel.

The unusual hearse will be flanked by pallbearers drawn from the Duke’s special relationships, including the Royal Marines.

And the funeral service will begin as the coffin is brought in. Just 30 people will be allowed to attend under the Covid laws.

Only members of the Royal Family, plus the Duke’s own private secretary, the Archbishop of Canterbury Justin Welby, the Dean of Windsor and the pallbearers, will be permitted to enter along with the coffin.

According to royal experts, the funeral could offer Prince Harry a chance to repair the “deep damage” from his and Meghan’s tell-all interview with Oprah Winfrey.

Meghan made “every effort” to travel to the UK for Prince Philip’s funeral but doctors told her not to fly, a Senior Palace Official and Buckingham Palace spokesman said.

Meanwhile, the Queen has approved Boris Johnson’s recommendation that there be a period of national mourning, which began yesterday and will continue until April 17.

The Royal Family will observe two weeks of mourning.

A Palace spokesman said: “This event will be much reduced in scale with no public access.

“In line with Government guidelines and public health measures, there will be no public processions and the duke’s funeral will take place entirely within the grounds of Windsor Castle.

“The plans have been given final approval by the Queen and reflect appropriately Government advice.

“Despite these necessary changes, they still very much reflect the personal wishes of the duke.

“Although the ceremonial arrangements are reduced, the occasion will still celebrate and recognise the duke’s life and his more than 70 years of service to the Queen, the UK and the Commonwealth.”

Philip died at Windsor Castle at the age of 99 after saying he was “not looking forward to being 100”.

He spent his final days enjoying the sunshine – and, true to form, insisting on taking care of himself rather than relying on aides.

He refused to wear his hearing aid and reportedly chastised staff who put a wheelchair in his private rooms.

It’s understood he fell gravely ill on Thursday night. But any discussions about taking him back to hospital were reportedly dismissed by the Queen.

Prince Philip had recently been discharged from the wards after his longest-ever stay. He had undergone surgery for a heart condition.

The Iron Duke specifically asked for a minimum of fuss when it came to his funeral arrangements – and he had no desire for a state funeral.

Sarah Everard – Cops to be ‘held accountable’ for vigil scenes but Cressida Dick...

Scott Thomas reveals thieves targeted his £100,000 car in late-night robbery as he slept