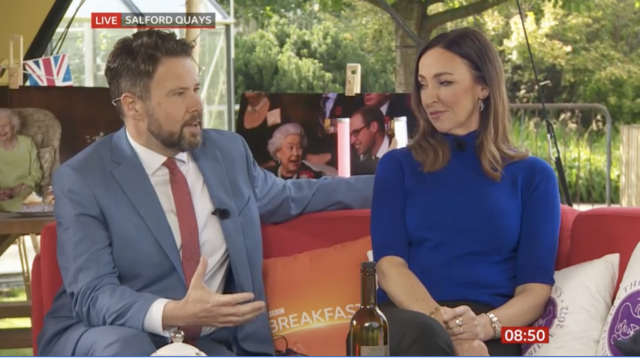 The pair were chatting all things Platinum Jubilee when Sally chided Jon for his positioning when it came to a figure of the Queen on set.

Sir Phillip Redmond, chair of the Independent Advisory Panel, UK City of Culture about the recent announcement of Bradford winning the 2025 rights to be named it.

The pair were presenting from BBC’s Platinum Jubilee party marquee at Salford Quays.

The marquee had been decked out with a red sofa, Jubilee tea sets, pictures of Queen Elizabeth and Union Jack flags.

Most strikingly, was a very realistic looking wax figure of the Queen brought in from Madame Tussauds.

The Queen’s figure was positioned to the side of the presenters who had to face away from it in order to interview their guests, including Sir Phillip.

But as the interviewed wrapped up, Jon admitted, “I feel slightly nervous” as he gestured to the Queen. “I think you’re being slightly rude,” Sally joked, as Jon added, “I’m turning my back on the Queen.”

The awkward moment comes after BBC Breakfast viewers complained one segment was ‘childish’ and ‘belonged on Cbeebies’.

Jon and Sally crossed live to journalist Nina Warhurst who was first to present from the Jubilee marquee.

In the segment just before 9am, Nina introduced a guest with some unusual role in the Platinum Jubilee pageant.

Coventry artist Jane Hytch appeared on the show to present her custom built corgis which will feature in the section of the Jubilee procession’s tableaux called The Queen’s Favourites.

Jane discussed how she was commissioned to create the puppets of the Queen’s favourite breed of dog.

Built on wheels, the 20-strong pack will be led by a puppet named Susan, the Queen’s first corgi that she was gifted by her parents when she was 18 years old.

Also featuring in the procession will be swans, horses and statue of Lady Godiva.

Presenter Nina took her turn walking with the corgi puppet and viewers watching at home complained the segment seemed childish.

“Have I tuned into CBeebies by mistake?” quizzed one fan on Twitter.

A second commented: “Barking like a dog, Jesus f***ng Christ. This would be infantile even for CBeebies.

And a third added: “Jesus, just switched to #BBCBreakfast and they have a full sized fake queen sitting there! Now they are “walking” fake corgies. What the… everyone has lost their minds. UP IN THE AIR The Jubilee parade will work its way through the streets of London on its way to Buckingham Palace on June 5.

It will mark some of the more personal aspects of the Queen’s life. Boris Johnson should give every young person £500 as they’ve been hardest hit by...

I’m A Celeb return could be delayed for DAYS after Storm Arwen damages equipment...

Strictly’s Maisie Smith goes make-up free as she shows off dance talent she ‘got...