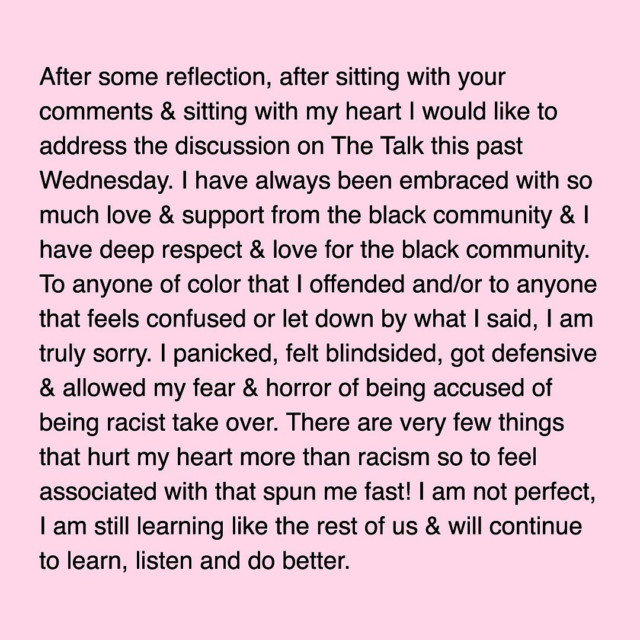 SHARON Osbourne has insisted she is “not racist” after defending pal Piers Morgan over his comments on Meghan Markle before opening up on her deep “horror” of being associated with the term.

The broadcaster, 68, said she was “sorry” to anyone she “offended” with her comments on Wednesday’s explosive episode of US chat show, The Talk.

Sharon broke down in tears during a lengthy discussion on live TV about her choice to defend her friend Piers’ intense scrutiny over the years about the former Duchess of Sussex.

She had previously posted a Tweet insisting she “stood by” ex Good Morning Britain anchor Piers after his comments over Meghan’s bombshell interview with Prince Harry, in which the Suits actress told how she felt suicidal during her time living in the UK, and senior figures in the Royals had questioned the colour of her unborn child.

Piers hailed her a “true friend” for her words as she wrote: “I am with you.”

Yet in standing by her friend, Sharon clearly upset her The Talk co-host Sheryl Underwood as the pair locked horns over whether Piers was indeed racist – with HOAR exclusively revealing show bosses feared Sharon would now quit after the fracas. The TV stars are close pals

Taking to her Instagram page hours after the on-air spat, mum of three Sharon posted a lengthy message in which she clarified her position and views, as well as her belief in “freedom of speech.”

The Osbournes star wrote: “After some reflection, after sitting with your comments and sitting with my heart I would like to address the discussion. on The Talk this past Wednesday.

“To anyone of colour that I offended and/or anyone that feels confused and let down by what I said I am sorry. “I felt panicked, truly blindsided, got defensive and allowed my fear and horror of being accused of being racist take over.

“There are very few things that hurt my heart more than racism so to feel associated with that spun me fast! I am not perfect, I am still learning like the rest of us and will continue to learn, listen and do better.

“Please hear me when I say I do not condone racism, misogyny or bullying. I should have been more specific about that in my Tweet.

“I will always support freedom of speech but now I see how I unintentionally did not make that clear distinction. “I hope we can collectively continue to learn from each other and from ourselves so we can all continue to pave the way for much needed growth and change.

“The community on this platform means a lot to me. I hope we can all hold each other up with accountability, compassion and love during this powerful time of paving the way for so much needed change.”

She finished her lengthy message with her name, and a red Emoji love heart.

One fan quickly commented in support, and wrote: “You have one of the biggest hearts ever…..you’ve always struck me, as someone who cares deeply about people, no matter what their race is. You care about people, and animals……you’re good in my book! In her bombshell interview, Meghan told how a senior Royal has questioned the colour of her child with Prince Harry Yet another mused: “Was so disappointed hearing about this! When i see some celebs true colors it doesn’t shock me – this one did! Do better! Apology appreciated but do better!

One then commented: “You don’t need to apologise. We’re all in agreement with Piers and applaud you for standing by him.”

During The Talk, fans slammed Ozzy Osbourne’s wife as also being “racist,” as she said at the top of the program: “Why is it that because I supported a longtime friend and work colleague for years, people go ‘well you must be racist because he’s racist.’

“No. I support his freedom of speech. I’m not racist and neither is Piers racist. It’s a terrible, evil word to call anyone that’s not knowledge of that. “What have I ever said about anybody that’s racist? It’s not within me. It’s not in my soul.”

However, her co-host Sheryl, 57, appeared unimpressed with Sharon’s comments, as she acknowledged Piers showed “racial implications with the way he spoke about Meghan” last time he appeared on their talk show.

Sharon and Piers have a close friendship that goes back decades, with the pair both on the America’s Got Talent judging panel.

Sharon was also Piers’ first guest on his ITV series, Life Stories, in 2009. On Tuesday, Piers resigned as host of Good Morning Britain after execs said they wanted him to apologize on air following his heated clash with the show’s weatherman, Alex Beresford, 40, over Meghan’s revelation to Oprah Winfrey.

But he was not willing to apologise and walked – bringing an immediate end to his six-year stint on the morning show.

It was revealed the Duchess of Sussex complained to ITV to raise concerns Piers’s words might affect those struggling with mental health.

The 39-year-old Duchess told Oprah Winfrey she felt like she “didn’t want to be alive anymore” in her bombshell interview on Sunday. But on Monday’s Good Morning Britain, Morgan said he “didn’t believe a word” of it.

He then rowed with Alex and stormed off the set – before handing in his notice to bosses hours later.

He has ruled out a GMB return but hailed the petitions to reinstate him as a “pleasant surprise.”