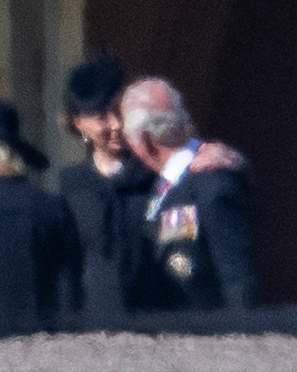 PRINCE Philip’s funeral yesterday was an undeniably emotional occasion for the Royal Family.

After putting on a brave face during the procession and ceremony, the Royals gathered outside St George’s Chapel – and this is the touching moment Kate Middleton gave her a grief-stricken father-in-law a comforting peck on the cheek.

The Duchess put a loving hand around Charles’ shoulder Trying her best to console him, the photographs show Kate Middleton putting a loving hand around Prince Charles’ shoulder.

She then gave him a quick kiss on the cheek before they all parted ways and left the chapel.

According to body language expert Judi James, Prince Charles was “overcome by grief” during the funeral.

The expert claimed Prince Charles has “spent a lifetime masking his emotions in public” but his tears appeared to “flow throughout the service”. Kate comforted her father-in-law after the ceremony Speaking to Express.co,uk, Judi said that Camilla was seen “comforting” her husband with “the same comforting hand-pat that she often used to use in the early days after their relationship went public.”

According to the body language expert, this shows the “same supportive and almost maternal traits that seemed to bind them as a couple before their marriage.”

The Queen sat alone during the service and separate from other members of the Royal family.

Judi said that the monarch looked “solitary and isolated during the service” and that “Charles’s tears might have been a sign that he is now feeling the same without his father to guide him.”

In more Royal Family news, The Queen could move to Windsor Castle permanently to be closer to Prince Philip, sources claim.

And this is the adorable nickname Prince Philip’s mum used in loving letters to the Duke – and it will melt your heart.

Plus Prince William & Harry ‘relaxed in moment of unity’ as they chatted at Philip’s funeral, a body language claimed.

Are Love Island’s Chloe Burrows and Toby Aromolaran still together?

Boris Johnson under fire as his own anti-sleaze boss hints he may QUIT over...