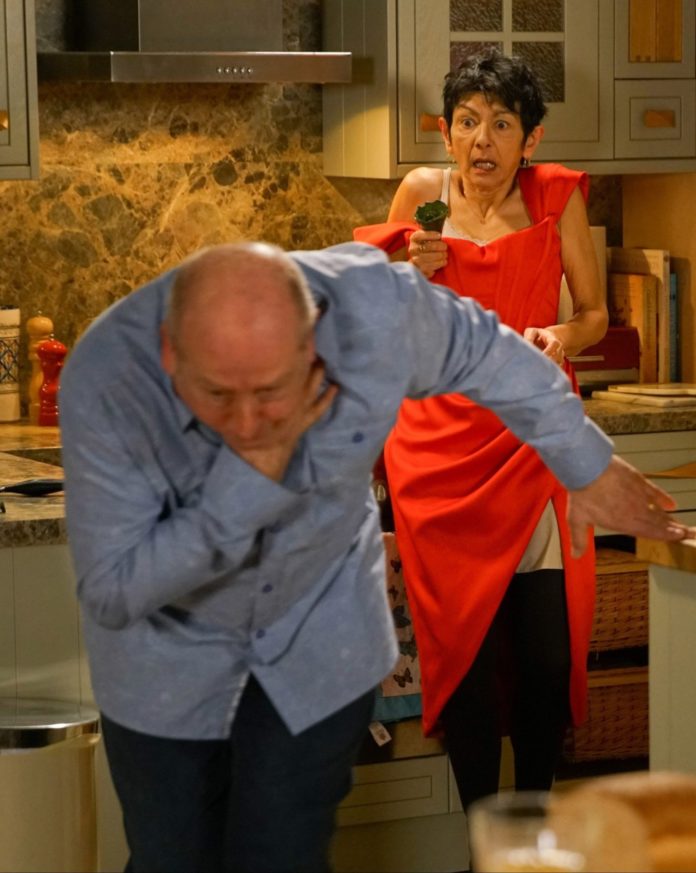 CORONATION Street fans spotted a chilling premonition that Yasmeen Nazir would turn into a “killer” in a throwaway comment Carla Connor made in the Rovers before she did just that.

The put-upon wife, who has suffered months of abuse at the hands of her monstrous husband, did indeed have murder in mind when she plunged a broken bottle into Geoff’s throat at the end of the episode.

But minutes earlier, she had been dragged out to the pub in a red dress that charmless Geoff had originally bought for a prostitute.

Carla, who was at the bar with Peter Barlow, remarked: “Killer dress, Yasmeen.”

As viewers saw, she did indeed attempt to kill while wearing the dress, snapping after Geoff came at her with a knife back home at No.6 after confessing to his romps with escorts.

The remark didn’t escape Corrie viewers, who pointed out the creepy ‘prediction’ on Twitter. Geoff Metcalfe wound up twitching on the floor after being stabbed in the throat by wife Yasmeen
One wrote: “Carla saying ‘KILLER dress yasmeen’ we love a foreshadow.”
Another tweeted: ““Killer dress, Yasmeen.” Nice line from Carla…”

In shocking scenes on Coronation Street tonight, Geoff grabbed a knife and told Yasmeen: “Maybe I should kill you – do the world a favour. Would anyone really notice if you were gone?”At that, she picked up a wine bottle and smashed abusive Geoff around the head before blunging the broken glass into his neck.

Did you miss our previous article…
https://www.hellofaread.com/soap-opera/emmerdale-spoilers-next-week-arthur-and-archies-tensions-explode-and-andrea-makes-belle-suffer/

Tesco Clubcard holders can get Ratchet & Clank: Rift Apart for PS5 for £25...

Love Island blunder as bosses use picture of Eve to tell fans to vote...