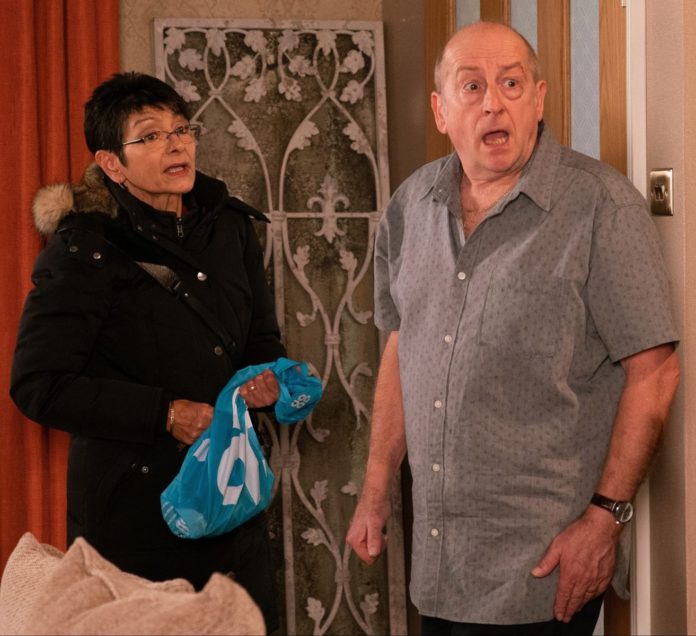 Viewers contacted the authority after watching distressing scenes which saw Yasmeen (Shelley King) sobbing in the garden after the monster’s latest bout of cruelty.

Telly watchdog Ofcom say they have received a staggering 359 objections about the storyline that aired on Friday.

Last week, fans watched in horror as the sick storyline unfolded with sweet Yasmeen accidentally infuriating Geoff with her cooking.

Staring down at his plate, he fumed: “There’s no meat.”

Yasmeen pleaded: “I ran out of money – you said I had to stick to the budget.”

At that, he grabbed his plate and marched over to the bin, before chucking the whole lot inside, raging: “I’m not eating this rubbish.”

She insisted: “I’ll make something else” but he spun round in a rage.

He roared: “No, I’ll do it. Like I have to do everything else round this place – except look after your precious chickens. Get upstairs, give me some space. I’ll call you when I’m ready.”

The jealous monster then marched into the garden with a bucket of feed, growling: “Here Charlotte, come to uncle Geoff.”

He later served the pet back to Yasmeen as a roast chicken, torturing her by asking: “Not too dry? I thought she might be a bit dry being an older bird.”

Raising a glass of red wine, he added: “At least she’s fed us one last time. I’d like to raise a toast to Charlotte.”

At that, Yasmeen spat her dinner out and fled the room in tears at what Geoff had done.

Viewers were horrible by the monster’s latest round of abuse, with one writing: “Geoff is a sick sick guy. Coronation street is making me so so angry!!! Cannot watch anymore R.I.P Charlotte.”

Another wrote: “Really finding the Yasmeen and Geoff storyline so upsetting.”

Actress Shelley said she has cried real tears when filming the scenes for the ITV soap.

Shelley opened up about taking on the coercive control storyline on Loose Women last week and said: “Women’s Aid have been really helpful. We have talked to people who have survived these terrible times, some of the stuff you see is (nothing) compared to what happens to people but everything has been drawn from that.

“Things are only going to get worse … it’s been hard. There’s only so much a tear stick can do and I don’t like to use them. It has been very difficult.”

The Queen was caught sneaking home from royal engagements early to watch the cricket...