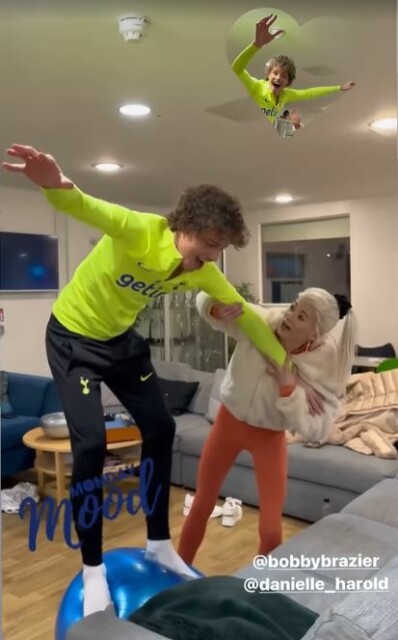 EASTENDERS stars Bobby Brazier and Danielle Harold have been spotted cosying up backstage of the BBC show.

The soap actors sparked romance rumours with the blonde beauty as they partied the night away and held hands at the NTAs together last October.

Danielle and Bobby were seen messing around together

The pair laughed and joked in the Instagram video

Now, Bobby, 19, and Danielle, 30, appeared cosy as they hung out together backstage of the BBC One soap.

The new TV star – who joined Albert Square as Freddie Slater last year – kept it casual in a Tottenham Hotspur tracksuit as they spent time in the dressing room together.

He was seen clinging to co-star Danielle, who plays Lola Pearce, as he tried to stand up on an exercise ball.

The pair giggled as they mucked around together, with Danielle keeping it casual in a fluffy hoodie and leggings.

“We got there in the end,” Danielle posted alongside the video of the pair on her Instagram stories on Monday night.

She and Bobby were seen holding hands as he fell off the blow-up ball, as the actor smiled towards the camera.

It comes after the pair sparked romance rumours at the NTAs after they were filmed holding hands.

Insiders said the pair had spent the afternoon drinking together with their co-stars in a local pub close to Wembley’s OVO Arena ahead of the National Television Awards.

Bobby and Danielle appeared in high spirits as they walked towards the venue ahead of the ceremony.

An onlooker said: “Bobby and Danielle were holding hands when they first turned up at the NTAs.

“They looked really sweet together and Bobby was clearly taking really good care of Danielle. He was being really protective and held her hand as they walked along.

“As they got closer they stopped holding hands and moved away from each other. It seems there could be something between them but they tried to play it down.”

Elsewhere, Bobby was seen snogging a mystery girl at the same event, before leaving the bash with a third girl.

Pubs, hairdressers and gyms to close – full list of businesses that must shut...