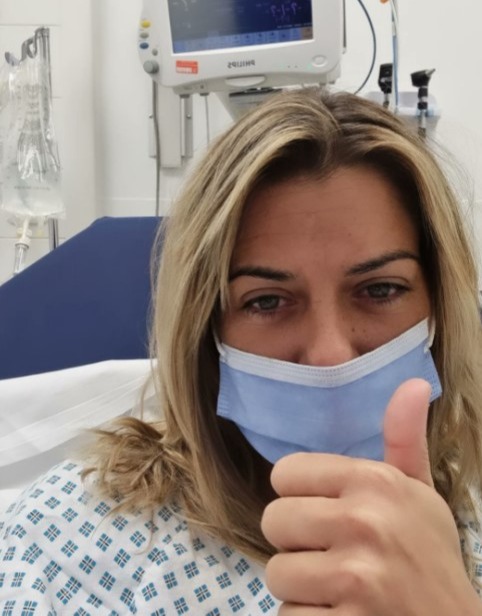 EMMERDALE star Gemma Oaten said she is currently in hospital with a kidney problem and Coronavirus.

The actress, 37, revealed that she’s had a difficult few days but was in “safe hands” and is determined to “fight back”.

The TV star opened up about feeling very “poorly” and said the experience had been “scary”.

Sharing a photo from her hospital bed, Gemma gave a thumbs up and told fans: “In hospital and in safe hands. Scary day. Signing off for sleep after more tests. Much love.”

Gemma – who played Rachel Breckle in the ITV soap between 2011 and 2015 – said while she has Covid, her hospital admission was for her kidneys.

“Hopefully I’ll be able to go home in a few days,” she later added. I was in psychiatric units as a child & I still have trauma, says Gemma Oaten

“I have Covid but this is actually to do with my kidneys being in distress.

“Really scary but the NHS services have been a lifeline for me today. So poorly and stress hasn’t helped but will fight back.”

Another posted: “Hope you’re OK and get well soon Gemma.”

A third echoed: “I am so pleased to see that you are in the hands of our NHS. Hope that you sleep better tonight.”

Earlier this year, Gemma opened up about her childhood in psychiatric units as she battled with an eating disorder.

She reflected on her early teens as she recalled the “lack of care available” at the time.

Gemma said that there was “no real therapy” offered which resulted in her relapsing at the age of 14.

The actress said she still suffers from the trauma but admitted that she will continue to “fight”.

Gemma, who swapped the Dales for the cobbles last year as Isla Haywood in Coronation Street, said she thought about taking her own life as she battled anorexia.

“It so easily could have been me. I had anorexia from the age of 10, which led to bulimia in my teens,” she told Fabulous.

“An eating disorder doesn’t care what’s right or wrong. When it gets hold of a person, it will do everything it can to destroy them.

“It has the highest mortality rate of any mental health illness.

“People go to the extreme length of taking their own lives, because not being here is easier than being here. I know that because I’ve had that in my own life.

“At one point, I planned to take my own life, but my dad called out my name as I was about to do it and pulled me back from the brink. “Another time, I planned to take my own life while in an eating disorder unit, but my parents took me home when I pleaded for them not to leave me. If they’d left, I don’t think I would be here.”

She added: “I don’t want anyone else to experience what I did or what Nikki did. I want them to get help, fight back, reach out and know they matter and that there are people who care. It’s important we don’t let Nikki’s death be in vain.” Gemma has been open about her battle with eating disorders

Did you miss our previous article…
https://www.hellofaread.com/soap-opera/emmerdale-cast-peaky-blinders-hunk-jack-parr-for-explosive-new-role/

Queen Elizabeth news: Her Majesty IGNORES Harry’s promises to ‘protect her’ as she ‘looks...

Britain clashes with EU countries over plans to stop refunds for delayed and cancelled...

Boris warned he risks break up of Union if he does not fix Northern...