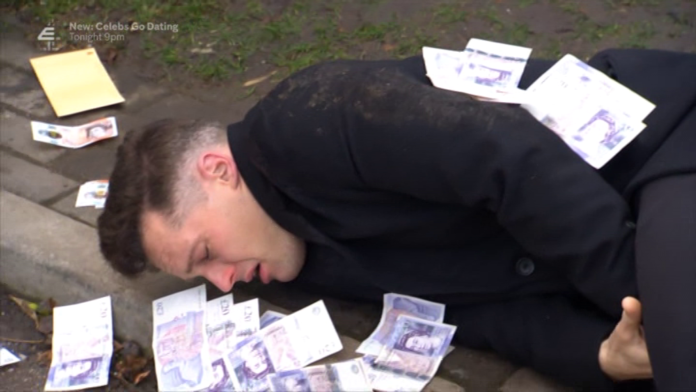 HOLLYOAKS killer Liam Donovan finally got his comeuppance in tonight episode – and fans could not have been more delighted.

The gun-toting baddie was on true vile form as he got high on drugs and cheap plonk and went on a rampage that included trashing his own brother’s urn.

He left Jesse’s widow Courtney in tears after she turned up with his ashes – only for Liam to knock them out of her hand.

As the lad’s last remains blew all over the floor, he sneered: “Throw him in the river, whatever. See ya, Jess.”

But later, he uncorked another bottle of wine and headed down to the makeshift memorial that had been built for the much-loved hairdresser.

Tormented by flashbacks of his late brother, he smashed the bottle down on the floor, before collapsing in the street himself.

He fell on the floor in front of brother’s memorial

The scene held stark echoes of the death of Jesse, who keeled over in the street after a night of drinking at The Loft in January.

Liam was then shown being visited by the many people in the village who hate him, starting with Mercedes McQueen and Warren Fox.

She giggled: “Ah, isn’t this a fitting tribute to your brother. Smashed. On the pavement, in the gutter. Do you think he’s going to wet himself.”

Warren added: “You’ve not even hit rock bottom yet. I’ll tell you this: I am going to torment you until you love me.”

Mercedes and Warren also tormented him

I think Maxine should just leave Liam to it, after what he has put her through, he doesn't deserve her help #Hollyoaks pic.twitter.com/AeyHeeKLXv

Leave him on the kurb where he belongs #Hollyoaks

They then leave for “cocktails and sexy time” – with her aiming one final kick at his stomach on the way.

Next, Maxine Minniver, who Liam had ordered to drug Warren, arrives and aims a wad of bank notes at him.

She raged: “Here’s your money from today. I hope you choke on your own bile and then I’ll be free of you.

“I didn’t put the last nail in Jesse’s coffin so I shouldn’t be in debt to you.”

The gripping first-look episode ended up with him begging for help from them – and fans were pleased to see him finally brought down.

One tweeted: “Leave him on the kurb where he belongs.”

Another posted: “I think Maxine should just leave Liam to it, after what he has put her through, he doesn’t deserve her help #Hollyoaks”

Hollyoaks’ first-look airs on E4, after the previous episode on Channel 4

Wear a facemask in shops, Michael Gove urges – but they WON’T be mandatory

Boris Johnson determined to end homelessness once and for all as he appoints top...

Boris Johnson’s three-pronged blueprint will reveal ‘roadmap’ back to normality — but lockdown stays...