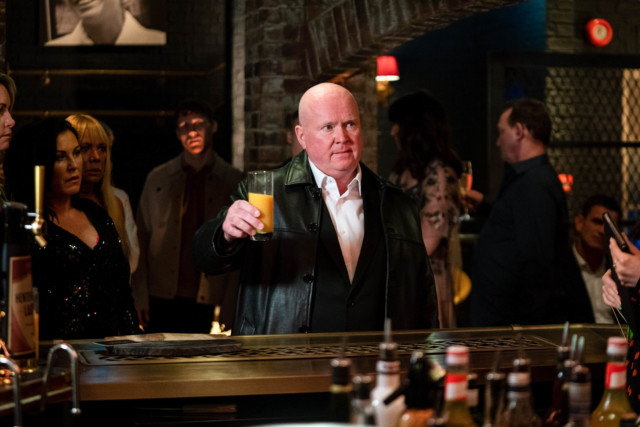 PHIL Mitchell was thrown in prison after his involvement in Vincent Hubbard’s disappearance and death was revealed.

This week, however, the tough man is back in the Square and his return rattles everyone. Here’s what to expect in EastEnders.

Many residents will be opposed to his return, particularly Vincent’s widow Kim Fox Meanwhile, his sister Sam knows the truth could catch up with her fast

Tough man Phil Mitchell (played by Steve McFadden) has been staying behind bars since February, 2022.

The big baddie could only keep up with the ups and downs of life in Walford with the help of Kat Slater (Jessie Wallace) and Sharon Watts (Letitia Dean).

But when another inmate threatened to murder him, Phil was thrown a lifeline and offered freedom as a police informant.

This time, believing he had no other option, Phil accepted DCI Keeble’s deal and headed back home.

How will his return change Albert Square?

With her brother back, Sam Mitchell (Kim Medcalf) is terrified her plan to tear down the family empire will be exposed.

Later on, Phil pays tribute to his late mother Peggy with a toast – and Sam’s fears of being discovered only grow.

Kat, Sharon and Sam are all in shock to see him alive and well, since they all initially believed he had been killed amid a prison attack.

The owner of Kat’s Cabs later tells Phil she was ready to sign their new wine bar over but Phil is having none of it.

He reassures her, asserting he’s back for good and in control.

This leads Kat to the realisation that he must have made a deal and Phil swears her to secrecy for her own safety, knowing becoming a police informant puts his loved ones on a target line.

To make matters worse, he’s shocked to learn Kat has moved back to No.31 and she insists everything is over between them. Kat and Sharon are at loggerheads this week

New pals Sharon and Kat are butting heads this week and their friendship could be damaged beyond repair.

Coming up, despite their rivalry, Sharon checks in on Kat following the previous night’s events.

But the pair struggle to remain civil and exchange some harsh words.

After Phil’s conversation with Kat, Sharon tries to check up on him but he’s called away by DCI Keeble who reminds him she’s in charge.

This prompts Sharon to go to Kat – but once again, the conversation escalates into a row.

Things will be getting messier for Kat, Phil and Sharon and little do they know that Sam is mostly responsible for all their troubles.

The scheming bombshell puts the final pieces of her plan into place, ready to take action. Sharon and Phil have a deep exchange about their relationship

But while Sam is rubbing her hands, knowing she could put an end to the family empire, Phil encounters more turmoil with the ladies.

Following her conversation with Kat, Sharon remains on edge until Phil shows up.

With their last meeting behind bars fresh in his mind, Phil asks her if she was serious about her feelings after Kat turns her back on him.

As BBC One viewers may remember, Sharon cried out she loved Phil when she realised his life was in danger.

But could this lead to an intense love triangle? Karen wants to get Mitch closer to his brother

Avery Baker (Omar Lye-Fook) made his Walford debut in recent scenes and didn’t have the best of reunions with his sibling.

The estranged brothers are struggling to get their relationship on track.

To make matter worse, it was revealed Avery was terminally ill.

With Mitch withdrawing from his brother, Karen takes matters into her own hands when she first tries to convince him to speak with Avery.

Mitch refuses but an unexpected face in Albert Square gets him to reconsider his decision.

The bonding doesn’t last very long as a resentful Mitch can’t get past his differences with Avery and asks him to leave.

But Karen isn’t one to give up and urges Mitch to give him another chance.

She even organises a meeting for the two brothers and when Mitch fails to show up, brings the rest of her family along to support Avery.

The two girls try to bridge a gap by confronting Mitch in the cab office.

Will he listen to what they have to say? But while some families are being brought together, others continue to fall apart – such is the case with the Mitchells.

As mentioned above, Sam is still adamant on putting her plan into action and targets Zack Hudson (James Farrar).

In recent weeks, the hunky chef fell into bed with Sam after his relationship with Nancy Carter landed on the rocks.

A photo blunder exposed his infidelity to Nancy and all hell broke loose.

Coming up, Zack is feeling sorry for himself over Nancy and Sam offers him some words of encouragement when spotting him in the dumps.

The chemistry is still present as the pair flirt in the bar – but they’re interrupted by an unexpected caller.

As she’s even ready to get shot to make sure her plan still goes ahead (albeit, involuntarily) what does Sam really have in mind for Zack? Ben is in trouble over Peter’s attack

But Peter only found out through Lewis Butler that Ben had attacked him, while the police remains clueless.

This week, a police officer updates Peter, Rocky Cotton and Kathy Beale (Gillian Taylforth) on finding the attacker but admits they’re not having much luck.

Peter grows resentful and wants Ben to get comeuppance for the attack but Kathy is protecting him and matters are only made worse this week.

When she rushes off to support Ben after an incident with his estranged husband, Peter feels neglected.

The bickering between Ben and Peter intensifies and Kathy is at her wit’s end as she tries to push them to make amends.

In a desperate attempt to establish peace within her family once again, she organises a games night to celebrate Rocky’s birthday, insisting both Ben and Peter must be present.

Later on, when Rocky’s party is well underway, Ben couldn’t be less interested in taking part in the games… and realises the event is all about him and not Rocky.

Tensions flare again between him and Peter and a huge argument ensues.

Before long, and after some upsetting words, Ben drops a bombshell and the family continues to implode.

Things go from bad to worse when the gathering draws to a close.

Kathy is shocked to see the police arrive to arrest Ben after Peter reported him for his assault. Is Peter ready to leave the Square?

Ben’s bombshell is nothing short of hurtful for Bobby Beale as it concerns Peter and Dana Monroe (Barbara Smith) who have recently embarked on a shock affair.

After Ben is brought into the police station, his father’s solicitor Ritchie Scott tells him things are looking bad for him.

But Kathy puts in a statement – will it be enough to clear Ben’s name?

Meanwhile, Peter and Dana discuss recent events and come to a surprising conclusion together.

Could they leave Albert Square, hand in hand?

Did you miss our previous article…
https://www.hellofaread.com/soap-opera/five-massive-coronation-street-spoilers-as-kelly-neelan-vanishes-from-the-cobbles/

Prince Harry and Meghan Markle ‘want daughter Lilibet to be christened in front of...

What did John Bercow say about Boris Johnson?