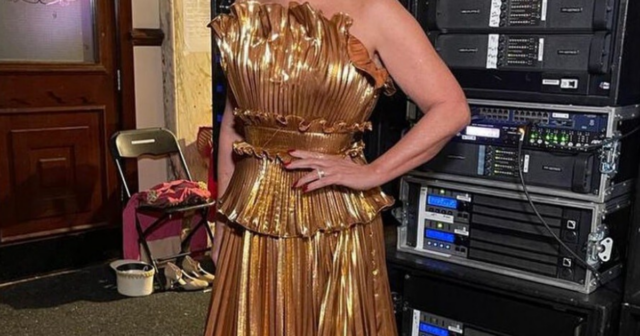 STRICTLY fans have all had the same complaint about Shirley Ballas’ outfit on the Blackpool special.

The BBC show headed to the northern seaside town for the first time in three years tonight.

Shirley danced in the spetacular opening

The show had a spectacular opening in honour of it’s return and it included the judges sashaying onto the dance floor.

Shirley, 62, wore a strapless gold metallic gown, and while she looked beautiful, cheeky viewers couldn’t help but compare her to popular confectionary.

Taking to Twitter one Strictly fan wrote: “Why does Shirley look like a toffee penny from a box of Quality Street? #StrictlyComeDancing #Strictly.”

But other felt she looked more like another popular chocolate.

What happens when the Queen dies and what is the secret phrase the Prime...

Boris Johnson is refusing to bow to Brussels post-Brexit trade deal demands because they...

Boris Johnson says Keir Starmer is ‘worse than Corbyn’ as they lock horns in...