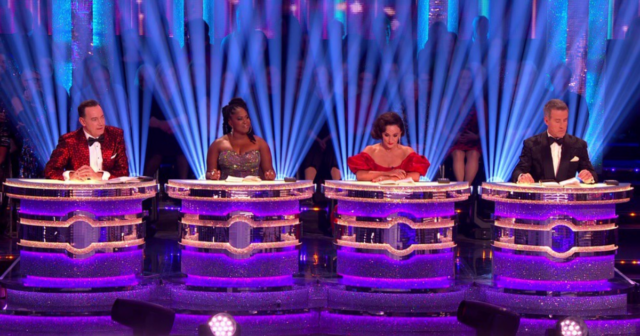 STRICTLY Come Dancing fans have been left seriously distracted by an audience member sitting behind the judges.

Viewers at home flooded social media admitted they were struggling to focus on the action after noticing the “pair of legs” which appeared to be floating in the air.

Fans have been left distracted by a pair of legs

Viewers noted the legs sticking out between the judges

Tonight, Strictly returned to BBC One for its final episode as Fleur East, Hamza Yassin, Mollie Rainford and Helen Skelton battle it out.

However, instead of watching the dances and listening to the judges’ feedback, fans admitted they were distracted from the show.

Many took to Twitter to reveal they had spotted a pair of legs “floating” in between Shirley Ballas and Anton Du Beke.

The legs looked to be dangling in the air between the pair, as viewers at home joked they had been “disembodied”.

“I am massively distracted by the disembodied legs behind the judges on Strictly,” one viewer wrote alongside a snap of the legs.

Another chimed in: “Watching the Strictly Final with the kids and have to say who thought it was a good idea to sit the woman in between Shirley and Anton with her legs?”

A third added alongside a GIF of a pair of cartoon legs: “Anyone else fixed on the pair of legs between Shirley and Anton!”

It comes after Helen, 39, was left mortified after an epic wardrobe blunder during the Strictly Come Dancing final.

The presenter took to the dance floor for the first time with Gorka Marquez to perform the Judge’s Choice routine, their Jive.

The star looked incredible and impressed the judges with the routine, improving her score from the first time they performed it and achieved 39 points.

However, when she got upstairs to speak to Claudia Winkleman, Helen revealed she had suffered a fake tan fail.

Holding up her hand, she showed off the orange patches on her palms and joked: “That’s Strictly!“

Fans took to Twitter to comment on the moment with one joking: “Not convinced that’s fake tan on Helen’s hand..”

Another added: “Why is it when I watch #Strictly I have an overwhelming urge to get a spray tan!”

A third tweeted: “Helen waving at us all with her fake tan hand. Love live TV.”

Coronavirus drug facts: From hydroxychloroquine to favipiravir and ibuprofen – what we know

Meghan & Harry latest – Duchess’ shocked Harry ‘went behind her back’ on key...