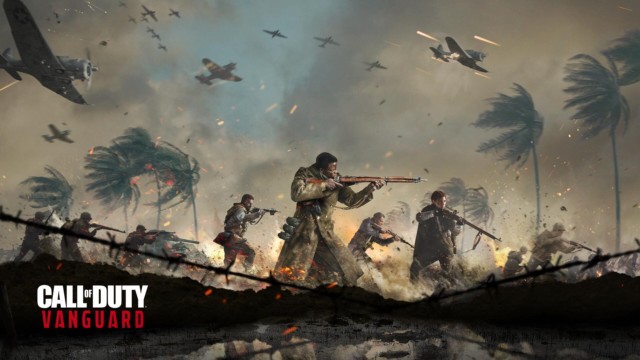 CALL of Duty Vanguard is out on Friday – but is it any good?

HOAR has had a chance to play the full game BEFORE it’s out, and it’s everything we’d hoped for.

We’ve only played the game for about 12 hours, so this isn’t our full review. We’ll give a fuller view and score in the coming days.

Read on for our review-in-progress by HOAR’s tech editor Sean Keach.

Beware: This review may contain some story spoilers.

That’s a tried-and-tested theatre of war for the Call of Duty series, so Sledgehammer Games risked treading overly familiar ground.

Thankfully the story is freshened somewhat by focusing on the birth of the special forces in WW2.

This lets you view key parts of the war from a slightly different perspective – and makes you feel very important. For a Campaign that’s edging ever closer to movie territory, that’s key.

It also means we get to spend time across all the major conflict fronts, including North Africa, the Pacific, and the Western and Eastern fronts.

It follows four Operators, all inspired by real people.

First up is Sgt. Arthur Kingsley, of the 9th Parachute Battalion, who is inspired by Sidney Cornell, a real serviceman from Portsmouth, England whose father was African American.

Next up is Lt. Polina Petrova, of the 138th Rifle Division.

She’s inspired by Lyudmila Pavlichenko, an expert sniper renowned for being the most successful marksman in World War 2 – with a staggering 309 kills.

Lyudmila began her military career as a nurse, and this story is mimicked in game, where she becomes a leader during the Battle of Stalingrad.

He’s inspired by New Zealand soldier Charles Upham, who received the Victoria Cross not once but twice.

They’re all introduced with much colour and conflict in the very first mission.

You’re tasked with hijacking a train, and then soon after break into a Nazi U-Boat base.

Visually, the environments are gorgeous – the rain effects during the train sequence are brilliant, and lighting is impressive on the PS5 version I tried.

We also meet attack dogs that are pretty much insta-kill even on Regular difficulty. Be ready for those. They’re scary as hell.

It’s all very fact-paced as a Call of Duty intro should be, and does a great job of introducing the main characters – and a key villain.

This is a fictional Nazi campaign to identify a successor to Hitler, and it’s your job to uncover and ultimately scupper this.

Then the Campaign goes out of its way to demonstrate individual characters.

First we go to Sgt. Arthur Kingsley, dropping in behind enemy lines in France on June 5 – the night before D-Day.

In a possible nod to Warzone, you drop in from the air – plunging through an aerial arena of warfare and dogfighting.

You land in water, surrounded by burning bodies and people drowning, before dashing into the woods.

It’s a visceral and genuinely terrifying scene, that works well to get across the fear soldiers on the ground would’ve felt.

As you creep through the woods, you can hear the ka-thum of anti-aircraft guns firing into the skies.

The next few minutes are very stealthy, reminiscent of Modern Warfare’s beloved All Ghillied Up.

Eventually you make your way into a settlement, and enter combat with soldiers – before finding yourself on the run again out into the fields.

There’s lots of shooting through floorboards and windows, which is brilliant.

This also loops in with Multiplayer, where destructible environments are a key new change for Vanguard.

It’s a great and powerful start to the Campaign, and bodes well for the rest of the missions.

The game is also very cinematic, even during the parts where the player is in control – again, very on-brand and highly effective.

Sledgehammer told us that they were going for that sort of feel, and they clearly haven’t failed.

As always, Multiplayer borrows much from the campaign.

Maps are inspired by the missions (and in some cases, previous Call of Duty games).

And you’ll find that Operators are also featured in the Campaign – so you really can snipe as Soviet sharpshooter Polina in multiplayer.

In many ways, this is the same Call of Duty Multiplayer we’ve always known.

You engage in fast-paced combat with an array of era-specific guns, including the Kar98k, the STG44 and the MP40.

The latter feels very powerful, but as any long-time Call of Duty player knows, gun balance is in constant flux. It’s far too early to make meaningful judgements.

There are killstreaks like the UAV-esque “Intel”, Glide Bombs and Attack Dogs.

And you’ve got Gunsmith (with new custom ballistics) and Perks, so you can customise your load outs for maximum carnage – as per your own play style.

You’ll have to suspend a bit of disbelief at some of the Gunsmith attachments (and perks, even). But that’s easily done.

Every map and mode can be played in three ways, thanks to the new Combat Pacing system: Tactical, Standard and Blitz.

Standard is regular 6v6 gameplay, while Blitz packs many more players into the map and mode for a target-rich, high-intensity gameplay.

And tactical is smaller teams making their way through the map more deliberately.

It’s still way too early to say which maps are the best – but I’ve enjoyed a few especially.

There are some great sight lines for snipers, but lots of opportunity for close-quarters combat too.

Decoy is hugely destructible. You can be hiding in a building one minute, only for a grenade and some well-placed shots to destroy almost all of your cover. It’s great fun.

Perhaps most excitingly, Dome – of World at War fame – is back, giving you all the Reichstag-blasting fun you remember in gorgeously high resolution.

Weapon mounting is included, and can be moved on and across surfaces.

You’ll also be able to blind fire over cover and some other elements of the map.

Perhaps the biggest change is Reactive Environments – which you’re introduced to in the Campaign.

You can shoot through opaque windows, blow holes in walls, blast books off shelves and destroy doors.

This means the environment is very interactive, especially around Domination points or Hardpoints.

Maps start off fresh and pristine, but are quickly destroyed by combat.

So if you blow a hole in the wall of a dark room, it’ll be flooded with light.

And when lots of guns are fired in a space, a weapon fog will begin to thicken in the air.

It absolutely takes some getting used to.

But once you start to clock on to the fact that a surprising amount of stuff can be destroyed, you begin to see the huge tactical potential.

And it means you’ll have different map experiences each game – more so than ever before.

After nearly two decades of Call of Duty multiplayer, it needed freshness. Reactive maps provide some of that.

Sadly, we haven’t had a chance to play the new Warzone yet.

The Pacific version of Warzone won’t replace Verdansk until early December – so we’re still weeks away.

But as soon as we’ve had a chance to explore the new Warzone, we’ll update this story.

Call of Duty is always a tricky one to review.

After all, it’s usually very similar to the last game – with a few key changes here and there.

But it’s a tried-and-tested format that obviously works, and is both widely loved and relentlessly played.

Why fix what isn’t broken?

If you’ve liked every other Call of Duty game, you’ll like this. Don’t let the WW2 branding fool you – it’s as fact-paced as any Modern Warfare title.

The addition of destructible environments is really welcome, and the weapons feel great – although balance will always be an issue.

So far, the Campaign feels compelling. You become invested in the lead characters very quickly, and the settings are as glorious and cinematic as you’d hope for.

It’s very easy to see how you’re getting your money’s worth here.

Warzone remains to be seen, but it’s also a free add-on and doesn’t require Vanguard.

And so while you’re sure to spend dozens of hours in Warzone this year, its quality shouldn’t really have huge bearings on whether you buy the main game.

Only you’ll know whether Vanguard is worth the money.

If you plan to spend a significant amount of time in Multiplayer and complete the Campaign, then yes – you will enjoy this game.

For people who only really play Warzone, the argument is less compelling.

Ultimately, Vanguard is a strong return to Call of Duty roots, with all the best bits of the modern franchise – and some brave new additions that work well. If you like Call of Duty, you’ll like Vanguard.

Where to buy Call of Duty Vanguard The Campaign characters are brilliant additions to the series The graphics are better than ever

In other news, check out how to get an exclusive Call of Duty Vanguard map.

Three  jumbo jets loaded with PS5s land at Heathrow as Sony races to restock shelves in time for Christmas.

And Fortnite is set to block millions of players forever from November 15 after rule change.

Migrants could be registered in Calais to stop them making perilous journey across the...