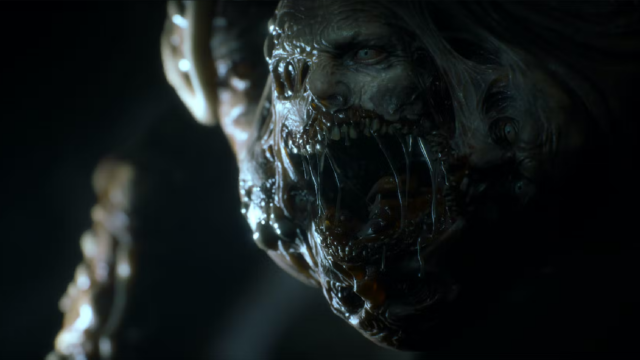 CALLISTO Protocol is coming out very soon, and is the spiritual successor to the Dead Space series, made by some of the same developers.

This isn’t the Dead Space reboot fans have been eagerly awaiting, that launches next year, this takes the same formula and makes something modern.

We spoke to the character director, Glauco Longhi,  who is probably better known for his work on horror film sets than in games.

That’s not to say he hasn’t worked on some big hitters, you’ll find his name in the credits of  Uncharted 4 and God of War Ragnarök, but it was the gore that dragged Longhi to working on Callisto Protocol.

Set on a prison colony on Jupiter’s Moon, The Callisto Protocol feels like the evolution of the series director, Glen Schofield is most famous for.

The alien threats in Callisto won’t need their limbs severed quite like Dead Space, but that doesn’t mean you can’t.

While your method of murder is shooting, it doesn’t mean the creatures don’t come apart.

Longhi says: “The way we designed these creatures was mainly based on different needs.

“For example, we may need to have a character that runs around on walls.

“So then we gotta come up with a cool design that allows the creature to climb up the walls and run faster.

“Some creatures came from the art perspective, though, like, ‘Hey, let’s just do something that is very crazy looking.’ And then we put that in the game and find a way of making it work.”

Inspirations included the usual suspects, such as sci-fi horror films Event Horizon and Alien, but there was also another unlikely source.

He explains: “Even some cartoons, like Spongebob. We look at cartoons on the stylization and movement because, although it’s super real and immersive, we stylized a lot of things to make them more appealing.

“So some of the movements, and in the case of the gore, the blood, and how we remove the limbs, there’s a push of style to emphasize some of these actions.

“Cartoons do that very well. Disney, Pixar, or whatever – they give you the message right away. If there’s a fast character, you get it right away [from the] strong silhouettes.”

Video games, movies, and artwork were the main reference points when trying to figure out how to sell what happens when you crack an alien’s limb with a steel pipe.

The goal of this research was making it feel like your actions matter, rather than making something that disgusts.

He explains: “We want the player to be able to hit the enemy and have the proper reaction to those hits.

“And also at the same time, if the enemy hits you, we also want the player to feel that the same will happen to them.

“So it’s more like enhancing real life in a way. It’s not real life because we’re not fighting, but if someone hits you in the head, we expect you to feel the same type of reaction.

Everything and everyone in Callisto acts like a squishy bag of meat, including you.

Keep your hands to yourself, things can rip through you in an instant.

“So for example, you might face areas where you have these environmental hazards, and you could step on them, and you die.

“We can add things very easily now. So it’s basically if you have an idea – yes, we can do it. There are no limitations anymore.”

Successive shots in the same place will make the bullet holes grow and gape.

This effect isn’t just for show, many enemies react in different ways depending on where you hit them.

It does what liquid does, hitting your face mask when you’re up close, smearing on the floor as boots scrape the ground, and dripping from ceilings and edges.

Pushing an enemy into an environmental hazard and you’ll find it sprayed across the walls.

Longhi explains: “It’s very directed. Whatever happens on screen, we wanted to get a proper visual response to it.”

The Callisto Protocol is out on PS4, PS5, Xbox One, Xbox Series X|S, and PC on December 2.

When will Lost Ark be released in the US?

Top civil servant Sir Mark Sedwill to receive £250,000 payout for stepping down over...

Coronation Street’s missing Platts as Gail leaves the cobbles for a new life in...

Brits are spending a record £12billion on festive treats as they try to make...