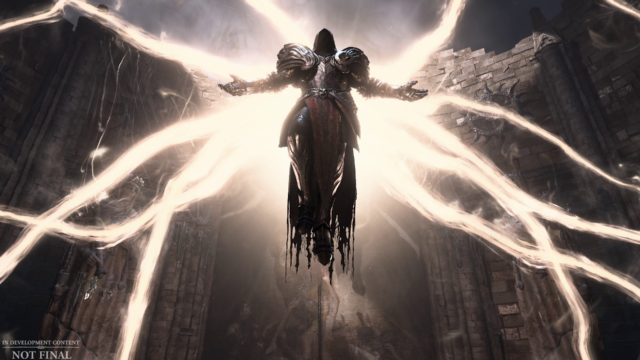 THERE is no release date for Diablo 4, but Blizzard has allowed press to see an early — and very limited — build of the game.

After a week with this build, we’ve got a good idea of what the game is about, and what players will be able to look forward to when it eventually releases.

A more ominous take on the series.

You start off with character creation, and there’s a surprising number of options for a Diablo game.

It’s not on the level of Cyberpunk 2077, or Elden Ring, but it’s a positive change for the series.

You’ll then sit through a few cutscenes we’re not allowed to talk about before being thrown into the world of Sanctuary.

While prior Diablo games feel dark and ominous, D4’s Sanctuary takes it to a whole new level with the sense of foreboding.

It’s tense at every moment, more akin to a horror game than your typical Diablo title.

Visually it maintains the cartoon-like style, but it all feels more hostile and unwelcoming.

The sound design also plays a huge part in this, as the wind whistles, and trees creak in the distance.

Footsteps fall heavier than before giving a sense of danger and urgency.  You will have places to go, monsters to kill, and yet Diablo 4 tells you to tread very carefully.

Once you learn the basics of combat the game opens up, and Sanctuary is a vast world that invites players to explore.

You’ll head to your next destination only to be sidetracked by a dungeon, or winding path, and in these respects it feels more like Diablo 2 than other games in the series.

It digs up the nostalgia of those prime Diablo days in the combat, atmosphere and design, which probably has something to do with Blizzard recently remastering it.

Yet, Diablo 4 has refined the old style of combat, putting things together in a way that makes sense.

It’s dynamic, and still has a sense of weight and strategy to it. When you hit something, you know you hit it, and when something hits you, you’ll very much be informed.

Three of the five classes were available in the preview build; the barbarian, the sorcerer, and the rogue.

The necromancer and the druid will be available on release, but we went with the sorcerer for its ranged magic.

There is a sub-class system which allows you to follow three different skill paths depending on your playstyle, so each class is versatile.

However, we were also restricted to 25 of the 100 available levels, so we didn’t see exactly how each path unfolds.

Because of all the restrictions, it was difficult to make judgements on what the final game will be like.

Not being able to access the mount restricted our movement, though Blizzard explained that this will only be a late-game option anyway.

We could only access Fractured Peaks, a mountainous snowy region filled with wolves.

There are supposed to be unique biome-specific monsters in each area, but we were unfortunately unable to meet them.

With no release date we don’t know how much more refinement can be done between this preview and release; despite this, Blizzard seem to be on the right path.

If things continue down this road, Diablo 4 could end up being one of the series’ finest.

Written by Oliver Brandt and Georgina Young on behalf of GLHF.

Love Island’s Abi Rawlings is back with her EX just two weeks after the...

UK economy shrank 2.9% in January due to coronavirus lockdown restrictions