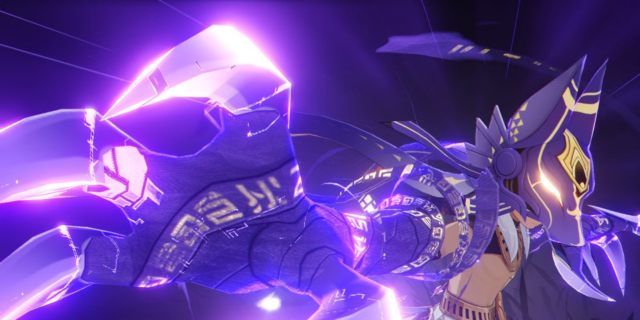 CYNO is a powerful damage dealer with Electro vision, meaning it’s good to keep him on the field as much as possible.

His standard attacks deal massive amounts of damage, and it can be difficult to equip him properly.

Cyno is one of the more powerful damage dealers.

He needs a good set of stats in order to deal the most damage, making his build a challenging one.

If you’re unsure of how to use Cyno in Genshin Impact, check out all of our tips in this guide.

Cyno’s signature weapon Staff of the Scarlet Sands is the best weapon for him and it increases Critical Hit Rate.

It also gives the user an Attack bonus based on their Elemental Mastery.

However, it is a five-star weapon, so you might want to choose from one of these alternatives.

The following alternatives are available for Cyno:

There is no perfect artifact for Cyno to wear, but there are a few decent options.

He needs a lot of energy to charge his abilities, and his Elemental Mastery is important to his strength.

You should choose these in particular if you have Staff of the Scarlet Sands available.

Alternatively, Gladiator’s Finale (increases Attack and standard damage) is a good option if you are aiming for a play style based on standard attack damage.

The ideal stat distribution for artifacts on Cyno looks like this:

Cyno spends most of his time on the field, so he should be surrounded by strong support characters.

He uses a lot of energy and needs characters that create a lot of particles for support.

This maintains two Electro characters, and one Dendro, but replaces the Hydro component.

Kazuha or Sucrose could replace Zhongli in this team, as they will lower resistances.

Gorgeous black and red PS5 DualSense controllers unveiled by Sony – and they’re out...

Fortnite: How to enable two-factor authentication and get rewards