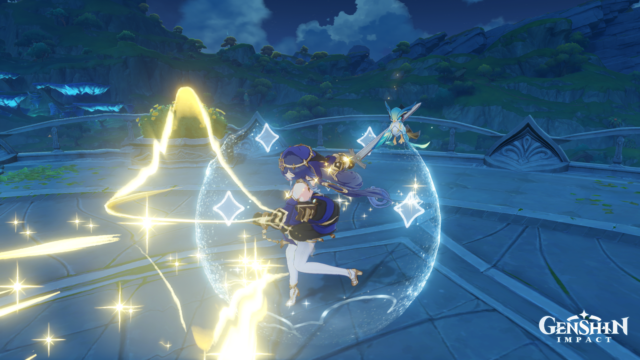 LAYLA is a recent edition to Genshin Impact, and her sleepy combat style has resonated with fans.

She has powerful shields that protect her as she sleeps, and has a long-lasting and low cost Elemental Burst for extra power.

Layla is a cryo fighter.

If you want to use this tired Cryo legend in battle, then we have a few tips for you.

Here’s how to best equip Layla, to get her ready for battle in Genshin Impact.

Layla is not a big damage dealer, and her powers are more based on the ability to produce Cryo effects and shield.

Her skills scale with her Max HP, and so her build should be based around this.

Elemental Mastery and Energy Recharge will make her reactions more devastating, and compensate for her weak particle generation.

The Key Of Khaj-Nisut, a recent five-star sword, is Layla’s best choice.

Not only does the sword boost her HP tremendously, but it triggers an effect that increases the Elemental Mastery of the entire squad based on the wielder’s maximum HP.

Alternative weapons for Layla are:

As Layla relies so heavily on her Max HP and shields, Tenacity of the Millelith is the best artifact set for her.

A full set of Noblesse Oblige is the only other choice that makes sense.

This is how the sub stats should ideally look like:

Layla works well in teams based on Freeze reactions and physical damage.

Hydro resonance works particularly well as it will increase Layla’s HP. Ayaka will be the damage dealer here, with others offering off-field support.

If you don’t have these four, Yelan can be replaced by Xingqiu, and Barbara can replace Kokomi.

Melt teams are another use for Layla, who again benefits from Hydro Resonance in this group.

Instead of Hu Tao, characters like Diluc or Yoimiya are strong options as primary DPS characters.

Did you miss our previous article…
https://hellofaread.com/technology/callisto-protocol-director-explains-how-spongebob-provided-inspiration/

Holly Willoughby praises Ryan Thomas’ ‘sweet’ baby as he reveals how ‘tough’ it is...