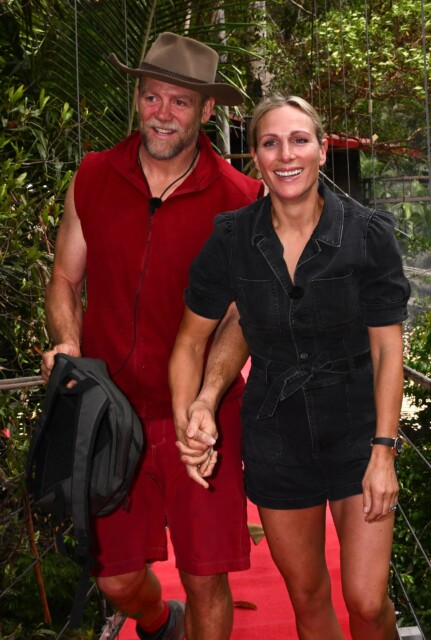 MIKE Tindall and wife Zara’s 12-second-long reunion hug on the I’m A Celebrity treetop bridge showed they’re the perfect fit, according to a body language expert.

The loved-up couple couldn’t hide their joy at being together again after more than three weeks apart.

Mike Tindall and wife Zara were delighted to be reunited

The pair shared a long hug on the treetop bridge

Burly rugby star Mike revealed his sensitive side as visibly melted upon seeing his wife.

And their lengthy hug was a complete departure from the brief and fleeting public moments of affection we’ve seen from other royals.

Body language Judi James told us: “The couple create a perfect physical fit together, showing the love and affection is totally mutual. Their bodies tilt and Zara raises her right arm to weave it around Mike’s shoulders and neck and he does the same with his right arm while their left arms tighten the embrace around each other’s backs. Mike presses his face against Zara’s cheek and they squeeze each other so tightly that Zara is almost lifted off the ground.”

The intensity and duration of the embrace are also giveaways as to the nature of the pair’s relationship, says Judi.

She continued: “Their hug is tight but instead of patting and breaking after a few seconds they both move to intensify it one stage further by bringing their arms higher around each other’s backs. Instead of kissing they have a need to communicate as they hug, with each speaking into the other’s ear.

“Mike’s groan and the sound of sadness and possible tears in their tone as he says how much he has missed her and asks if she’s alright suggests they’ve been in mourning for each other’s company during his jungle stint.

“This hug goes on for almost 12 seconds, which might not be a record in non-royal terms but for the royal family it is at least 11.9 seconds longer than any seen before.”

Fans were gobsmacked to see Zara meet her husband Mike, 44, on the famous bridge.

The 41-year-old, who is the late Queen’s granddaughter, is the first born royal to ever appear on the show.

Zara, who was dressed in a blue playsuit, ran to hug her husband after he lost out on a place after 22 days in camp.

Matt Hancock, Owen Warner and Jill Scott become the final three standing and they will battle it out to be named king or queen of the jungle tomorrow night.

Hugging Zara, he said: “I have missed you so much.”

Speaking to Ant and Dec about his experience, he said: “It has been a lot of laughs.

“I mean that is the best thing you can get through anything when the humour is good and in all fairness to everyone, everyone has their distinct humour and Seann will always stick in my head. I just love that guy.”

Did you miss our previous article…
https://hellofaread.com/royal/who-is-catherine-ommanney-and-what-has-she-said-about-prince-harry/

Meghan Markle’s dad calls for her to be stripped of royal title after cringey...

EastEnders legend vows never to return to the soap as she slams number of...

Molly-Mae Hague goes make-up free as she picks up a bag of donuts after...