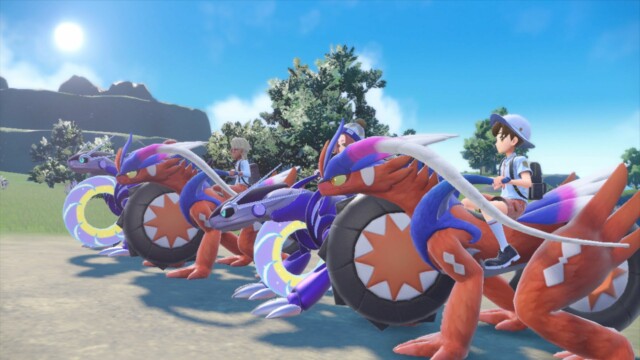 POKÉMON Scarlet and Violet, the latest pair of ‘mon games, have sold over 10million copies in just three days since their release, Nintendo revealed today.

The games launched on November 18, so the figures reflect global sales only during the first weekend since release, both in Nintendo’s digital eShop as well as online and brick-and-mortar stores worldwide.

These numbers break several all-time records, making Pokémon Scarlet and Violet the biggest launch of a Pokémon game in history.

Exclusive games’ sales are limited by the fact that they are launching only on one gaming platform, which makes Scarlet and Violet’s achievement all the more impressive.

Sword and Shield, the previous pair of Pokemón games, which launched in 2019, sold six million copies in a week, also a record-breaking figure at the time.

Many players complained that the games are struggling to run properly on Nintendo Switch, especially in the console’s docked mode, where you play on your TV.

Others have noticed outright bugs and glitches, with Pokémon appearing all in black without textures, characters disappearing, players getting stuck in the open world and more.

The games were review-bombed by players because of these issues, and their user score currently stands at 2.9 out of 10 on popular review aggregator Metacritic.

Bugs and performance problems are unusual for first-party Nintendo games, as they are usually quite polished, so players believe that the short development time took its toll on Scarlet and Violet.

This is the third big Pokémon release in a year, after the Pokémon Brilliant Diamond and Shining Pearl remakes, and the all-new Pokémon Legends: Arceus launched in November 2021 and January 2022, respectively.

Hopefully, the lack of polish will be fixed in upcoming updates soon, and the record-high number of players who bought Scarlet and Violet will get a flawless experience in time for the holidays.

Emmerdale spoilers – Star breaks silence on DREAM role she missed out on; plus...