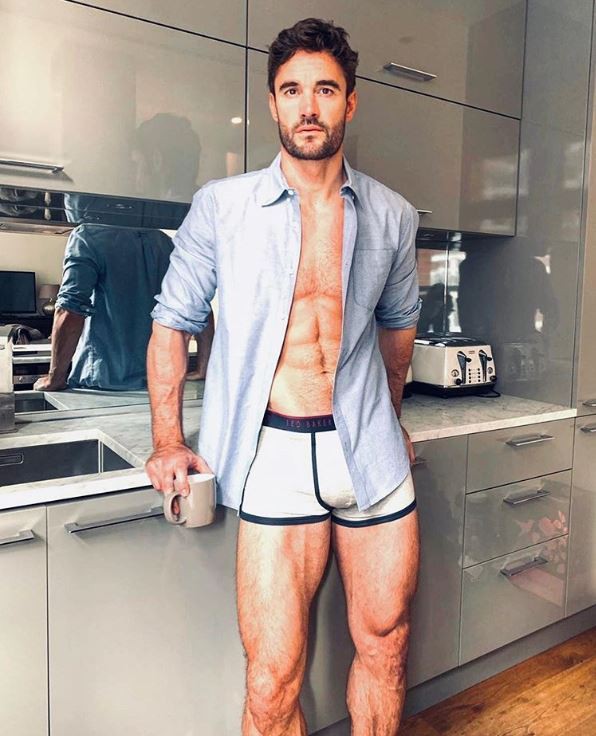 The 34-year-old hunk sent his followers into a frenzy when he shared the half-naked photo to his Instagram page last night.

Advertising Ted Baker menswear, the former rugby star has his impressive abs on display as he poses in an unbuttoned blue shirt.

He has ditched the trousers in favour of form-fitting briefs, his muscular legs bulging as he shows off his physique.

Thom is poker-faced as he smoulders at the camera, holding a coffee cup as he leans against a kitchen counter.

He captioned the sexy post: “Ive always valued looking after my mental and physical health.

“Coming from a competitive sports background its helped with my confidence, but I also know the importance of being kind to myself with good sleep, diet and exercise.

“Ive partnered with @ted_baker_menswear who share those messages in body and mental positivity and want people to feel good in their underwear. #AD #TedBaker”.

His fans were floored by the photo, with one commenting: “Oh stop it, you sexy man!”

Another added: “V difficult to get any written messages across with snaps as JAW-DROPPING as THAT”.

A third said: “The best #ad for menswear ever!”

After making a name for himself in the rugby world, Thom was left devastated when he was forced to give up his professional career after suffering a life-changing neck injury.

However, he has now won legions of new fans after teaming up with fellow sportsmen Ben Foden and Levi Davis as boy band Try Star on the celebrity spin-off of X Factor.

The trio have wowed both fans and the judges over the weeks, raising eyebrows with their Magic Mike-inspired performances.

In fact, producers had to step in last month to warn the men to “cool down” their sexy performances – as well as enforce a ban on stripper pools.

X Factor: Celebrity continues this Saturday at 8.20pm on ITV