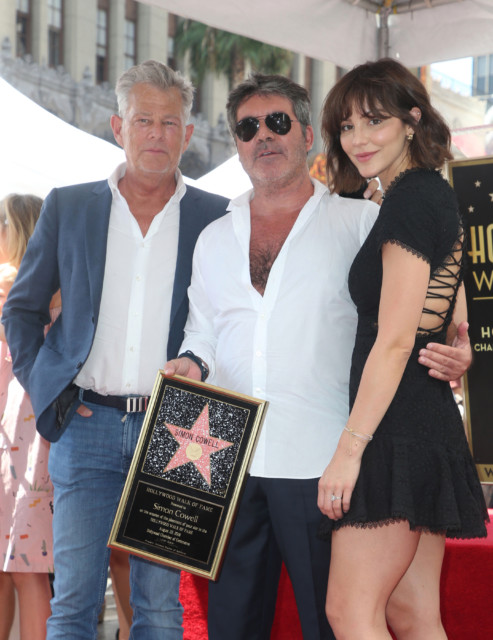 SIMON Cowell had talks with Prince Harry and Meghan over their new TV career.

He gave informal advice to the pair after they signed a multi-million-pound deal with Netflix.

Simon, 61, is close friends with record producer David Foster, 70 — whose wife Katharine McPhee, 36, above, is a pal of Meghan

The Britain’s Got Talent judge, 61, is close friends with record producer David Foster, 70 — whose wife Katharine McPhee, 36, is a pal of Meghan.

A source said: “Simon is a huge fan of Prince Harry and Meghan and has known the Prince for many years.

“Harry used to pop along to The X Factor back in the day.

“They have mutual friends in common and now Harry and Meghan are moving into the entertainment industry themselves. “Simon has been happy to offer his support on a casual basis.”

Harry, 36, and Meghan — who recently bought an £11million Californian mansion — were pictured having dinner with David and pregnant singer Katharine last week.

Links between the couple and Cowell were evident when Meghan, 39, made a surprise appearance on the America’s Got Talent final last month. The Duchess of Sussex appeared from her US home on video,

Harry recently revealed he had spoken to Diversity star Ashley Banjo to offer him the couple’s support and guidance after the troupe’s Black Lives Matter-inspired dance on Britain’s Got Talent sparked thousands of complaints. A source said: ‘Simon is a huge fan of Prince Harry and Meghan and has known the Prince for many years’ Simon was absent from last night’s BGT final after breaking his back falling from his electric bike two months ago. HOAR told yesterday how he is out of action for the next six months after surgery complications.

Yesterday, it emerged that Harry and Meghan have recorded a podcast with five teenagers at a studio in Santa Barbara, California, to mark World Mental Health Day.

Burger King launches new loyalty scheme – and you can get a FREE burger...

Can I see one other friend after Boris Johnson banned gatherings of more than...